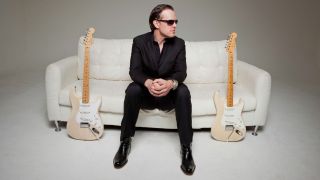 Joe Bonamassa will play a five-date UK tour in July, paying tribute to the leading lights of the 1960s British blues boom.

He describes the shows as a “homage to the music of Eric Clapton, Jeff Beck and Jimmy Page,” adding: “If it wasn’t for certain British musicians, the blues may never have exploded into rock music as we know it today – and indeed, may have passed into history.”

If follows a brief UK tour in March, with two dates added to one that was rescheduled from last year. Bonamassa will release his second album of all-original material, Blues Of Desperation, on March 25.

July tickets go on sale on January 29 (Friday) with a fan pre-sale available on January 26. In between the two runs, Bonamassa also has dates in Germany and the US in March and April.