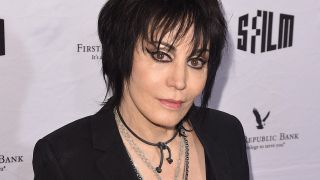 COVID-19 has caused chaos in the live music scene, although her summer stadium tour with Motley Crue, Def Leppard, Poison and Tuk Smith & The Restless Hearts is still scheduled to take place across North America.

But in a new interview with SiriusXM, Jett says touring right now wouldn't be right due to the ongoing situation.

She says: “I would not feel comfortable, I just wouldn’t. I wouldn’t feel comfortable putting the band or my crew in that position. I don’t really have that right to mess with their lives like that.

“I’m not saying it’s an easy decision – I know people are struggling all over the country with what to do and how to do it.

“Of course I want to play as soon as we can do it. I’ve heard there’s some ideas like a drive-in where we could still see live music. That’s a step I’d enjoy taking, but it’s still not people together and that’s going to take a while."

Jett adds: “When people feel safe to be together, I would hope that we’ll all feel the same way. If things are safe, I’d be into it, but obviously that means testing but you’ve got to keep doing it.”

Last month, Motley Crue’s Tommy Lee checked in to say that preparations for the tour were continuing, which would be the band’s first live shows since New Year’s Eve 2015.

The tour is due to get under way in Jacksonville on June 18 and wrap up in Los  Angeles on September 5.