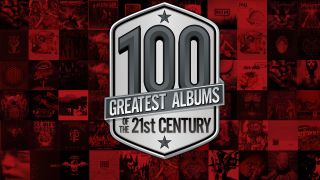 This is it, folks. The ultimate list counting down the greatest albums of the 21st century. It's taken us ages to put together, not just picking the records, but ordering them and obeying the three rules we set.

Here's how it breaks down:

THE MEANING OF GREATEST

We asked our panel to choose the albums in this list based on merit of lasting impact, influence and generally kicking ass.

Look, this shit has been keeping us up at night as it is without making it more difficult for ourselves. No exceptions.

To be considered genuinely one of the greatest albums ever, it needs to have existed in the public consciousness for a certain period of time and not lost any of its impact. For that reason, this list is 2015-backwards only.

NO LIVES OR COMPILATIONS

Building on the momentum of 2012’s The Curious Case Of…, Halestorm delivered a war chest stacked with style, sheen, swagger and buckets of arena-ready anthems. With her ear-splitting screams and fearsome licks, Into The Wild Life cemented Lzzy Hale as one of the scene’s finest frontwomen, and Halestorm as one of 21st century rock’s most exciting names.

What We Said: ”The quartet have come of age spectacularly. World domination seems inevitable.”

Band Pick: “It’s so brave, with such out-of-the box thinking. It shows you can play hard music and still be super melodic. There’s borderline death metal on there, there’s minstrel campfire music, pop, rock… it’s very, very inspiring. I’d definitely say that that record has shaped a lot of things coming after it – ourselves included.” – A Nameless Ghoul, Ghost

What We Said: “Queens Of The Stone Age’s Songs For The Deaf is being hailed as the feel good album of the summer.”

If anyone was still left thinking that Sabaton were a novelty act, fourth album The Art Of War took such cynical beliefs, loaded them into a panzer and fired them into the sun. Brimming with soon-to-be setlist staples and teetering on concept-album territory with a look at General Sun Tzu’s military tome of the same name, it solidified Sabaton as big players.

What We Said: “The profile of the war-obsessed Swedes has been growing as fast as any metal band on Earth.”

Proud upholders of the British heavy metal code, Orange Goblin have never been more enthralling than on their seventh album. Every single song, from the rampaging Red Tide Rising to the mesmerising, epic title track, is an absolute cast-iron belter, furiously running riot across the ears like a horde of zombie bikers on the windswept ride of their lives.

What We Said: “This is Orange Goblin at their defiant, ribald, boisterous best. They simply don’t put a foot wrong from start to finish.”

For a band that could have so easily become also-rans of the scene, Of Mice & Men stood up when it mattered, melding infectious melodies with crushing heaviness to produce one of the best modern age metalcore albums. OG Loko remains the Cali crew’s defining anthem, while Austin Carlile silenced any doubts over his decision to leave Attack Attack! behind.

What We Said: “It may not be reinventing the wheel, but when you have choruses as catchy as these, does it really matter?”

Undisputed gods of grind for the last 30 years, Napalm Death somehow surpassed even their own high standards of extremity on their 15th studio album. A wild experiment in distortion and unhinged noise, it ensured that the band’s furious humanitarianism hit home with massive force, while gleefully pushing sonic extremity into ever-more daring territory.

What We Said: “Conceived as an exposé of modern slavery, this is perhaps the most experimental LP the band have made in the 22 years of the current lineup.”

Band Pick: “I really feel like Midian was when that incarnation of Cradle Of Filth was at its peak. They were such an influence on me as a young kid, and then further on as a musician as well. That was the golden run that they were on, culminating in that record, and I think that it’s been the standard they’ve set and aspired to ever since.” – Scott Lewis, Carnifex

What We Said: “There are reasons why COF remain one step ahead of the competition: they tell stories, constantly evolve, and have ambition and vision.”

The New Wave Of American Heavy Metal’s standard-bearers delivered one of the movement’s definitive albums in 2003, offering up a pummelling mixture of groove metal clobber, thrashy hooks and a touch of nu metal swagger. They may have become metal’s ultimate Nearly Band, but this was still a post-millennial classic.

What We Said: “Utterly irresistible in its ferocity, if The Impossibility Of Reason typifies the NWOAHM, then bring it on with all speed.”

Offering extreme metal riffs countered by cutesy vocals from teenage stars-in-waiting Su-Metal, Moametal and Yuimetal, no one had ever seen or heard a band quite like Babymetal. Their debut catapulted them to Sonisphere’s Main Stage, and Wembley thereafter. Metal hasn’t been the same since.

What We Said: “Babymetal is a celebration of something giddy and heedless that resonates with metal’s wilder impulses.”

Exhibiting a very Gallic sense of the perverse, Blut Aus Nord’s landmark album took black metal’s thirst for higher states of consciousness into new lysergic and licentious realms where no normal rules could possibly apply. Pitch-bending, yawning riffs whorled like a dust storm in five dimensions, creating an immersive nightmare that’s stained the scene ever since.

What We Said: “Like peering over the edge of a precipice, there’s a sickening, vertigo-inducing thrill to The Work…, but you may not thank the band for it.”