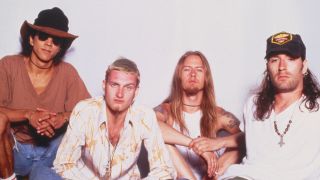 Rooster by Alice In Chains may have become one of the band's defining tracks, but it came from humble beginnings. When guitarist Jerry Cantrell found himself temporarily homeless at the start of 1991, he turned to a fellow grunge legend for help. “I was between places to live at that time,” Cantrell recalls, “so I moved in with [Soundgarden singer] Chris Cornell and his wife Susan Silver at their house in Seattle. Susan was managing Alice In Chains at the time. I stayed for a few weeks, up in this little room.”

Alone, late at night, Cantrell’s thoughts kept turning to his estranged father, whose psychological scars from his service in the Vietnam War had contributed to the breakdown of the family some years earlier. “That experience in Vietnam changed him forever,” explains Cantrell, “and it certainly had an effect on our family, so I guess it was a defining moment in my life, too.

“He didn’t walk out on us. We left him. It was an environment that wasn’t good for anyone, so we took off to live with my grandmother in Washington, and that’s where I went to school. I didn’t have a lot of my father around, but I started thinking about him a lot during that period.”

Sitting in front of a four-track recorder, the song that poured out of Cantrell might have been laced with bitterness. Instead, its harrowing lyrics were written from the standpoint of his father; describing the ‘stinging sweat’ and ‘mosquito death’ of a trek through the jungle, and an imagined skirmish with the Vietcong. The title was the nickname given to Cantrell Snr. by his great-grandfather: “Apparently he was a cocky little kid, and his hair used to stick up on top of his head like a rooster’s comb.”

“I certainly had resentments,” Cantrell notes, “as any young person does in a situation where a parent isn’t around or a family is split. But on Rooster, I was trying to think about his side of it – what he might have gone through. To be honest, I didn’t really sit down intending to do any of that; it just kinda came out. But that’s the great thing about music – sometimes it can reach deeper than you ever would in a conversation with anybody. It’s more of a forum to dig deeper.” Alice In Chains had enjoyed some success with their 1990 debut album Facelift and its single Man In The Box, but Rooster was arguably the first song to announce the depth of the band’s talent. Cantrell recalls that “it felt like a major achievement for me as a young writer,” and this sentiment was echoed when he played the demo to vocalist Layne Staley, bassist Mike Starr and drummer Sean Kinney.

When it came to recording Rooster, the band turned a prior engagement to their advantage. “Cameron Crowe had already come to us to ask for a song for his movie Singles,” recalls Cantrell. “So in the session that was meant for recording that one song [Would?], we ended up demoing about 10 songs, which included all the stuff that ended up on the [1992] Sap EP, Rooster and a couple of others from Dirt.”

Rooster by Alice In Chains: the video

Rooster was taped at Eldorado Studios on LA’s Sunset Boulevard, which the band co- produced with Dave Jerden. “It turned out to be really powerful,” notes Cantrell, “and the way Layne sang on it is amazing.”

Similarly powerful was the video, in which director Mark Pellington [fresh from Pearl Jam’s Jeremy] interspersed scenes of Apocalypse Now-style brutality with an interview with Cantrell’s father.

“My father had never talked about that time in his life, and was reluctant to do so if anyone ever asked,” recalls the guitarist. “So I was amazed that he agreed to do Mark’s request, for about an hour, on film.

“He was totally cool, totally calm, accepted it all and had a good time doing it,” Cantrell added in the notes for 1999’s Music Bank box set. “It even brought him to the point of tears. He said it was a weird experience, a sad experience and he hoped that nobody else had to go through it.”

Released as a single in 1993. Rooster drew immediate praise, both among followers of grunge and further afield.

“I’ve been all around the world,” explains Cantrell, “and I’ve talked to combat vets from Desert Storm and the recent war in Iraq – and they have a deep affinity with that song. I just recently got a letter from a guy in Iraq who told me his unit had changed their call sign to Rooster. Obviously it’s unfortunate that guys still have to fight for political ends. But it’s cool that people connect with that song; for it to be part of them getting through.”

And yet Rooster’s greatest triumph was ultimately a personal one. Against all the odds, the song repaired the fractured relationship between father and son.

“When I first played it to my father,” recalls Cantrell, “I asked him if I’d got close to where he might have been emotionally or mentally in that situation. And he told me: ‘You got too close – you hit it on the head’. It meant a lot to him that I wrote it. It brought us closer. It was good for me in the long-run and it was good for him, too.”