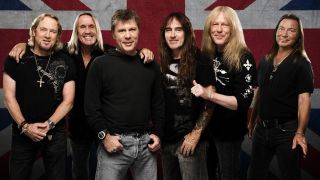 Iron Maiden frontman Bruce Dickinson says he wants to surprise fans on their upcoming The Legacy Of The Beast tour.

The run of UK and European shows will take place throughout May, June, July and August, with the tour named after the band’s mobile game and comic book of the same name.

“I’m looking at the show as something that should certainly exceed what we did on the Book Of Souls tour, and I’m approaching things a slightly different way.

“I’m approaching some of the songs a slightly different way. I’m conscious that over the years we’ve fallen into a little groove with some songs, so I want to try to shake that groove up a little bit.”

“I want them to go home going, ‘Fucking hell, I can’t believe they played that song!’ That’s the reaction I want.

“On the Book Of Souls tour, there was quite a lot of chatting with the audience. I’m not planning that on this tour because we’ve got so much to do and there’s so much going on. The show and the music is gonna carry the whole bloody thing.”

He adds: “We’re playing one or two things that people are gonna be really surprised by. There’ll be social media madness after the first show.”

Dickinson’s film Scream For Me Sarajevo, which documents his solo show in the middle of the siege of the city in 1994, is to be shown in cinemas across the UK from next month. Details of a home release will be revealed in due course.

Find a full list of Maiden’s 2018 Legacy Of The Beast tour dates below.