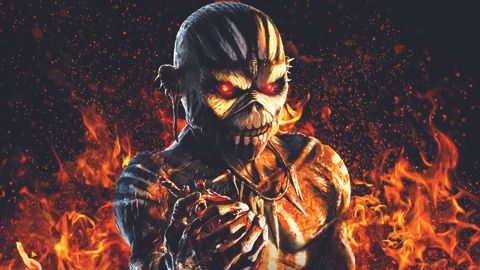 Live albums are interesting creatures. Made to capture a moment, somewhere in time, giving fans the ability to relive that one special night. But one show just isn’t enough for some bands. Iron Maiden’s gargantuan The Book Of Souls World Tour hit 36 countries in its two-year run, unleashing hell in Buenos Aries, Cape Town and beyond, and for The Book Of Souls: Live Chapter the best bits have been curated into one blistering track-list. Maiden have long been cultivating their global fan base, and throughout the ‘concert’ you can hear how ecstatic and elated every metalhead is at the mere sight of Steve Harris.

The audiences are just as integral a part of the Maiden live show as the band, filling the enormodomes of the world with deafening “whoa-oh”s, screaming on Bruce Dickinson’s command. Unfortunately the beer-loving frontman’s between-song witticisms and ponderings – which often prove to be the most amusing moments of any Maiden show – aren’t included here, but Live Chapter is a master class in what the mighty Maiden mean in 2017.

The track-listing leans heavily towards the new album (although sadly without the inclusion of Tears Of A Clown from the first leg of the tour), and the energy and tenacity poured into The Great Unknown is just as ferocious as it is into The Trooper.

Comprising 15 tracks across two discs, it’s not the epic two and a half hour set that Metallica might roll out, but the hand-picked anthems still receive the rapturous banshee screams that they did decades ago. Sure, there’s no Run To The Hills, Hallowed Be Thy Name or 2 Minutes To Midnight, but the welcome addition of a punked-up Wrathchild and a life-affirming rendition of Blood Brothers more than makes up for it. And while Fear Of The Dark doesn’t match the iconic version from Rock In Rio, there’s still something joyous about hearing thousands of your brothers and sisters in arms on the other side of the world bellowing it out.

Of course, no live album, or even a DVD, can ever match up to a live show, by Maiden or anyone else. So much of the Book Of Souls tour was about the visuals and the theatrics – from the Mayan stage set to the giant inflatable Beast to the beating heart spurting gallons of blood – the sheer scale of the operation is obviously missing from an audio recording. But what you can feel is the sense of conquest; you can almost hear the band’s Eddie-sized grins as another trip around the planet is complete, with Harris and co. still proudly flying the flag of heavy metal.