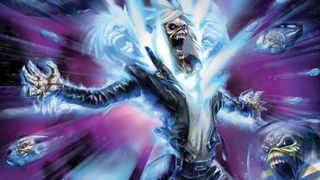 It’s based on the band’s mobile game Iron Maiden: Legacy Of The Beast and will see Eddie battle through the worlds featured on Maiden’s album covers.

Speaking about the storyline behind the series, a spokesperson for Heavy Metal tell Nerdist: “Eddie’s immortal soul is shattered and strewn across the cosmos. Now, Eddie must journey across space and time to battle the twisted legions of The Beast, seek out the lost shards of his soul, and bring order to the realms.”

Heavy Metal CEO Jeff Krelitz adds: “As a lifelong fan of Iron Maiden, it is a privilege to publish the first comic giving a narrative to their iconic mascot, Eddie.

“When we discussed the potential of coming together on this project, it was immediately clear that there was no better home for Iron Maiden than Heavy Metal.”

The first comic book will appear in the July edition of Heavy Metal before being launched as a standalone series later in the year.

Iron Maiden are currently on tour across North America in support of their latest album The Book Of Souls. See a full list of their remaining live dates below.