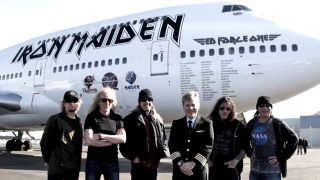 Iron Maiden with Ed Force One

Iron Maiden have released a documentary celebrating their journey across the world on Boeing 747 jumbo Ed Force One.

They used the customised aircraft to travel to 45 cities across six continents on their global tour in support of their 16th album The Book Of Souls.

And among the moments captured on camera in the video special is frontman and pilot Bruce Dickinson’s maiden Ed Force One flight to Fort Lauderdale, Florida.

The vocalist says: “Absolutely brilliant day out so far. Love the aeroplane, love the crew and I think everybody’s having a great time. I’m up here and I’m learning a lot – so what’s not to like?”

He later admits he’d get emotional when saying goodbye to the craft, and adds: “This aeroplane, painted up like this – it’s incredible. It has the nickname the Queen Of The Skies – and she really is. And in this guise, with Iron Maiden down the side of it, it just blows the doors off ever other plane on the planet.

“Honestly, if you wanted me to swap for Air Force One, I wouldn’t do it.”

Iron Maiden have two shows left on their The Book Of Souls world tour. They’ll play Luxembourg’s Esch-sur-Alzette Rockhal on August 2, and Wacken Open Air in Germany on August 4 – a performance that’ll be streamed live online around the world.