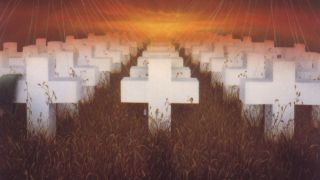 In many ways, the cover of Metallica’s third album Master Of Puppets is as iconic as the music itself. The painting is haunting, powerful and a statement in its own right. The artwork was by the late American artist Don Brautigam (whose initials are actually in the right-hand bottom corner of the front cover).

Having graduated from the New York School of Visual Arts in 1971, Brautigam had worked with an impressive roster of bands, including The Rolling Stones, ZZ Top, AC/DC, Mötley Crüe and Anthrax. He also designed the award-winning cover for the novel The Stand by Stephen King and adverts for Pepsi. However, the Master Of Puppets cover is among his most striking images.

Brautigam himself admitted in 2002 that his memory of the circumstance in which he was commissioned to do Master Of Puppets were rather vague. The fact is that it started with a sketch by James Hetfield and sent it to Brautigam as a guide. Hetfield wanted to capture the futility and price of addiction, as depicted so starkly in the title track, and came up with the concept of those gravestones.

“I knew the dimensions that would be used and a great consideration on all jobs goes into the design with that in mind,” the artist recalled. “Although I didn’t do the logo for Metallica, it works well on this cover.”

But there is something decidedly odd here, in that Brautigam copied Hetfield’s original sketch exactly, taking his rough outline as the master plan. Which is why, you may have noticed, the hands in the top corners have no fingernails and look a little childlike. That wasn’t Hetfield’s plan in the beginning, but the final result was impressive enough for such ‘mistakes’ to be overlooked. If anything, it added to the unique quality of the illustration.

Even the CD version of the cover art – obviously much smaller than the 12-inch canvas originally envisaged for vinyl – retains a striking quality, something Brautigam acknowledged.

“The album [vinyl] size shows more detail, but I like the CD format. In some cases, when I don’t like the overall look of any job, I wish they were even smaller.”

Surprisingly, Brautigam gave away the 17-inch by 17-inch painting to John and Marsha Zazula, who signed Metallica to their very first label deal with Megaforce Records. In 2002, they sold it on eBay for $7000. Six years later, it was auctioned at Christie’s in New York and fetched $28,000.