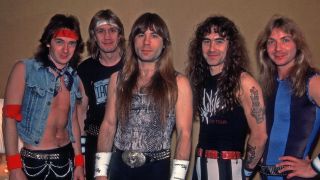 It’s August 1984. I’m 19 years old. I’m standing at passport control at Warsaw airport – and the members of Iron Maiden, together with manager Rod Smallwood, are all pissing themselves laughing at me.

History is being made here. In their quest to ride the road less traveled, Iron Maiden are about to start the 11 month World Slavery Tour. But more importantly, they’re about to become the first major western rock band ever to play in Poland, still very much a part of the Communist Eastern Bloc. It’s a full five years before East Germany will signal the end of European political separation by allowing its citizens free movement into West Germany. It’s five years before the Berlin Wall comes down. But the Polish authorities’ decision to let their young people bang their heads to says something is happening. Big cultural changes aren’t far away…

Me? I’m not really thinking about seismic political transformation right now. I’m thinking what a plonkus I am. I’m showing my passport, but I’m wearing a stoopid trucker’s baseball cap with my long hair uncomfortably tucked way up inside. Why? Because Smallwood and Maiden bassist and leader Steve Harris have told me the Polish authorities will take a dim view of my luscious barnet. Subversive type and all that… No matter that the rest of the band have hair down to their arses and no caps in sight. “They’re artists,” lies Smallwood. “It’s different for them. We don’t think you’ll get in the country if you don’t tuck your hair up.”

“We were all pissing ourselves when you put your hair up, looking all nervous.” said Harry after the event. And almost 32 years later Smallwood and Harris still never miss an opportunity to remind me of my gullibility over this ancient wind-up whenever they see me.

To be fair it’s amazing we made it to Poland at all. Full stage rehearsals had taken place in West Germany, with visas needing to be picked up in Cologne. The entire entourage is due to fly out of Frankfurt, but road manager Warren Poppe had somehow fucked up wake-up calls on departure day. We’ve missed a connecting flight, leaving me and assorted photographers stranded. Maiden are waiting for us, there’s a scheduled flight we’re going to miss, and Rod’s temper back in those days is somewhere north of volcanic. Warren thinks he’ll be losing his job. He says it over and over again, like a mantra. Time for some quick thinking. He gets out his credit card – seriously, his credit card – and uses it to hire a six-seater propeller job that we scramble into, allowing us to join up with the rest of the party in the nick of time. You couldn’t make it up.

Looking back on our stay in Poland, it’s hard to believe the world was ever really like that. If you own the 2006 DVD release of Maiden’s Live After Death, you’ll have seen the bonus hour-long Behind The Iron Curtain documentary. I’m lurking on it, often wearing a bright yellow homemade Aerosmith t-shirt. Cut-off sleeves obligatory. But it’s not only drummer Nicko McBrain’s tight pants that are wildly implausible. It’s the entire state of the country we visit. The coach we’re traveling in, the Trabant cars you see buzzing around, the hotels we stay in. They all look like relics from a different century. The level of government paranoia is an eye-opener too. With Polish security personnel provided to accompany us 24⁄7 as a non-optional extra, it’s obvious that they’re far more interested in spying on us than in keeping Eurogumbies at bay. Hard to believe this is Europe in our lifetime. This kind of shit only happens in North Korea, doesn’t it?

There are five shows in place – Warsaw, Lodz, Poznan, Wrocław and Katowice – in just six days. The band are promoting their fifth album, Powerslave, though its European release is still just under a month away. This doesn’t make much difference in Poland, since there’s virtually no music officially released there. A bootleg album – and we see tons of those – cost half a month’s wages.

The band are on fire, young enough to generate massive onstage energy. But old enough in their late 20s to be producing consistently enthralling, even challenging music. Listening to Powerslave on a pre-release tape (as all new music was distributed to the press back then), it feels to me like a classic in the making. On stage, led by vocalist Bruce Dickinson’s air raid siren voice and bulge-mongous yellow PVC trousers, opening one-two Aces High and 2 Minutes to Midnight showcase the band’s gumby-approved galloping metal style. The title track and 13 minute plus epic Rime of the Ancient Mariner, meanwhile, give more than a hint of the prog tendencies that will later become part of the Maiden hallmark, with guitarists Davey Murray and Adrian ‘H’ Smith weaving the kind if intricate patterns most metal bands shy away from.

The Polish “Billies” as the band call them (cockney rhyming slang – Billy Bunters) have never seen anything like it. 6000 of the buggers are crammed into the Torwar Sports Hall in Warsaw for the first night and they’re going apeshit. What’s really weird is that there are young soldiers in full army uniform talking their shirts off for a mosh and throwing their hats in the air for added pleasure in amongst the assorted human carnage. It’s endearing, but it’s still weird!

“I didn’t really think about the political side too much,” said ‘Arry when I interview him on the tour bus before the last gig in Katowice. “I wonder whether we’re being used as a propaganda tool, but at least we’re providing entertainment for the kids. They’re seeing something new and if our playing here opens the doors for other bands to come here, then the visit will have served a purpose.”

As we now know, Maiden’s pioneering steps really did help lead to change. Poland has since caught up, and now it feels like any other country on any touring band’s itinerary. No doubt it’s for the better overall, but I can’t help but feel a tinge of nostalgia for those pioneering steps we took all those years ago. You couldn’t always get the food advertised on the menu in the hotels. Beer was a rarity, which led to some shocking vodka binges, including a particularly memorable one where Davey Murray and I had to be literally carried home from God knows where by security fella Big John Harte. Transport was basic, the kind of bus you went to the swimming baths in when you were a kid – not exactly Ed Force One!

But the sheer joy on the faces of those Polish Maiden fans who were always somehow there, ready to mob the band the minute we left the hotel for a gig, the primeval, guttural roar of excitement that went up the minute the house lights went down, the sight of Iron Maiden at the very peak of their powers in this bizarre, otherworldly environment. These are all things that marked me, made me thankful to be part of something truly barrier-breaking, something that actually mattered.