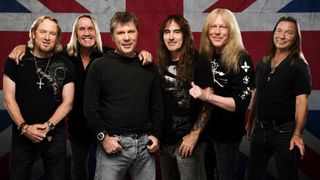 It’ll be the final date on the band’s world tour in support of their 16th album The Book Of Souls. And to celebrate the event, the band have teamed up with Arte TV to broadcast the entire show live from the German festival, which will be available to watch worldwide on August 4.

Iron Maiden Manager Rod Smallwood says: “We decided to finish the tour at Wacken as it is the ideal way to end this magical tour playing to 80,000 core metal fans at this legendary metal festival.

“Wacken has become such as international event with many thousands of fans from many other countries around the world joining and celebrating with the German fans so it is perfect for the final show of a memorable tour.

“Everywhere we’ve played the fans have been amazing and the reaction to the new songs and stage show has been phenomenal. The band has loved every minute on stage.”

He continues: “So when Wacken and Arte asked us to consider a live stream of our performance there we jumped at the chance to give our fans an end of tour gift.

“Streaming this final show live globally allows us to thank the many fans we played to so far, and, for those who couldn’t get to see us this time round, a chance to see just how spectacular the live concert is and what they missed.”

The set will be broadcast via Arte TV and the official Wacken website on August 4 from 9.30pm CET.