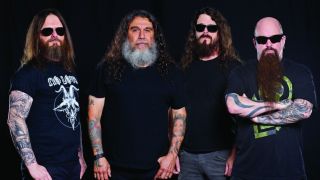 Slayer and Kiss will release comic books this year.

Slayer are working with publisher Dark Horse on a three-part title based on their revenge-themed videos for songs Repentless and You Against You – which share a story arc written by director BJ McDonnell. The first issue, Slayer: Repentless Volume 1, is due out later this year.

Guitarist Kerry King tells Rolling Stone: “I think of the songs I write as stories. And if nothing else, they are certainly visual. BJ managed to string it all together so it made sense.”

The comic’s writer Jon Schnepp describes the story as “a road journey – like a road movie of horror – and it goes across many states.

“It isn’t a mystical or supernatural story. It’s a straight-up human story of terror, like brother against brother, people feeding off hatred, the stupidity and horror of humanity.”

Kiss will also make their return to the comic book world in a new futuristic sci-fi title named Kiss #1 in October – almost 40 years after they first appeared in 1977’s Howard Duck. It will feature 10 collectable covers each highlighting a different member of the band.

Singer Paul Stanley says: “In our rich and lengthy tradition of championing KISS in the comic/panel graphic realm, we are proud to announce this partnership and look forward to breaking new ground.”

Singer and bassist Gene Simmons adds: “Kiss has had a four decade-long, proud history in comic books, starting with Marvel Comics in the 1970s, and now with Dynamite’s issS comics.

“Having our own comic book, I have to say, rekindles the thrill I first had as a young teenager, as I followed the adventures of my favourite superheroes. This is going to be fun.”

Meanwhile, Flaming Lips will also appear in upcoming Marvel comic X-Men ‘92, which will be released in August.

It was announced in February that Motley Crue would be the subject of comic book Motley Crue: Livin’ The Fast Life, which chronicles their formation and the peak of their notoriety.