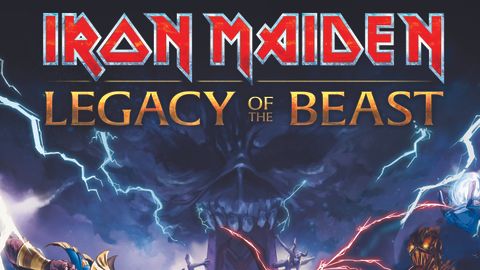 It should have been easy. Create a mobile game tie-in? Simple. Replace coloured gems with Eddie’s grinning mug for a metal-clad Candy Crush. Dabble in AR and have fans track down wild Eddies à la Pokémon Go. But then, this is Iron Maiden.

They know nothing of half-measures, and neither do the Legacy Of The Beast creators. Instead of a quick cash-in we have an adventure built with substance and flair.

It draws on Maiden’s rich heritage of artwork as basis for the story and design and overlays its on a deep, turn-based strategy gameplay system. Locations and creatures are inspired by iconic album imagery, with settings backed by song cuts from the band’s extensive discography.

You control Maiden mascot Eddie and a growing number of allies battling for remnants of his shattered soul in numerous clashes. Every character fought beside or against has different attacks, strengths and weaknesses. It’s a massive, ever-shifting – and addictive – battlefield of rock, paper, scissors. It’s enjoyable enough to overcome the annoyance of needing an always-on mobile data connection to play, and if the gameplay is challenging, at least it’s fair, not forcing you to spend real-world money on upgrade shortcuts just to survive. Interactive Maiden worth playing.