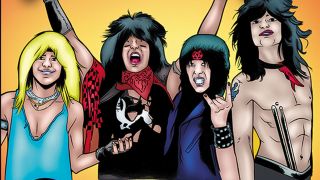 Motley Crue are the subject of a comic book that chronicles their formation and the peak of their notoriety.

Motley Crue: Livin’ The Fast Life is produced as part of the Orbit series by Storm Entertainment and is illustrated by Jayfri Hashim, who also wrote the story with help from Michael Frizell.

Hashim, a native of Singapore, and Frizell, a lecturer at Missouri State University, have previously collaborated on several projects.

Frizell says: “Jayfri has an enthusiasm for American rock bands unlike anyone I’ve ever met. He’s a walking encyclopaedia of song lyrics and facts.”

The comic is said to “highlight some of the more fanciful aspects of Crue’s mythology.”

Storm Entertainment president Darren G Davis says: “Comics can promote literacy. Once, I was a reluctant reader, but comic books fired my imagination, the combination of striking visuals and succinct narration compelled me to learn to read. However, this particular comic book is aimed at adults.

“Storm has published well-received biographies of other musicians, such as Bono, Prince, Metallica, and even Miley Cyrus, so why not the iconic bad boys who make up Motley Crue?”

Print copies can be ordered exclusively at Comic Flea Market and the publication is the latest in the Orbit series which has previously featured Metallica, Ozzy Osbourne, Alice Cooper, Keith Richards and John Lennon.

Motley Crue wrapped up their 34-year career with a Los Angeles show on New Year’s Eve.