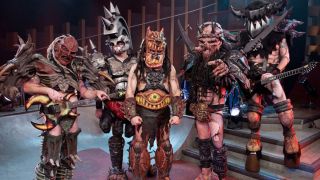 Gwar have announced that their Orgasmageddon comic book will launch later this year.

It was written by Matt Miner and was made possible thanks to a successful Kickstarter campaign which raised $45,957 thanks to 666 backers.

Dynamite Entertainment will release the four-comic series in June, with Miner encouraging fans to print out a coupon from his website and take it to their local comic store to register their interest.

Gwar’s Sawborg Destructo says in a video clip: “Attention stupid humans of Earth. I am here to talk to you about Gwar’s new comic Orgasmageddon.

“It’s a four-issue story with artwork by members of Gwar. There’s going to be multiple covers as well so buy them all – and make sure you litter your nerdy room with them.

“You don’t have to be a Gwar fan to like this because that stupid human Matt Miner is making the story that will appeal to all ages – including your nana!”

View one of the covers along with an inside page below.

Gwar postponed their annual Gwar-B-Q this year so they could concentrate on their 14th album.

“Suffice to say that they are working an album that will change the world as we know it, altering the consciousness of all living things.”

The band’s 14th album will be their first since the death of vocalist Dave Brockie, who died of a heroin overdose in 2014.