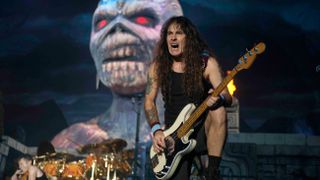 Iron Maiden have released a video thanking fans for their support on the band’s recent Book Of Souls world tour.

The metal giants played 72 shows in 36 countries for a total of 1.5 million fans on the tour, which was in support of their 16th album The Book Of Souls, released last year.

In the video, which can be viewed below, drummer Nicko McBrain says: “It’s been absolutely fantastic, a blast – the best tour yet. Everyone who has had anything to do with this tour, I thank you so much from the bottom of my heart.

“None more so than you lot, all you wonderful fans out there who have made this leg of the tour one of the most exciting and memorable tours I’ve ever done with Iron Maiden.”

Bassist Steve Harris adds: “It’s been a brilliant tour and the fans have been absolutely brilliant everywhere, but I’ve got to say we are all, if I’m honest, looking forward to a nice rest. We’ll see you on the next one.”

Iron Maiden travelled on a new-and-improved Ed Force One on the Book Of Souls tour, piloted by frontman Bruce Dickinson. In July, the band released a documentary charting their journey onboard the customised Boeing 747.