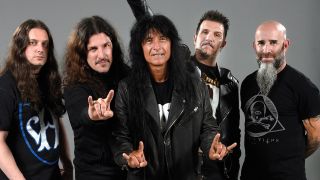 The unveiling of an Iron Maiden album is a momentous occasion in itself, but the fact Bruce Dickinson successfully battled throat cancer before its release makes their victory all the sweeter. Sixteenth album The Book Of Souls was already in the bag when Bruce received the news at the end of 2014, and the band put their campaign on hold while he recovered.

Happily, after chemotherapy and radiology, plus a good chunk of rest, the frontman was given the all-clear and the Maiden machine clicked back into action. Spanning 11 tracks across two discs, and clocking in at 92 minutes, their Mayan- inspired masterpiece is their most ambitious album yet. First single Speed Of Light, with its retro-game-inspired video, became an instant classic, while epic, 18-minute closer Empire Of The Clouds, penned by Bruce himself, told the tale of the ill-fated R101 airship. The band took the album on tour in the biggest-ever Ed Force One, and Metal Hammer went along to see their new show in Mexico, complete with a giant smoking cauldron, flaming pillars, ancient rock and a brand new Eddie. They’ve continued to tour across South America, USA, Brazil, Japan, China, New Zealand, South Africa, Australia and Europe, including a triumphant headlining slot at a rain-soaked Download, bringing their new music to an ever-passionate global fanbase.

“It’s an unbelievable honour to have Book Of Souls voted as album of the year,” Bruce tells us. “Thank you so much, everybody. Death or glory!”

Their music has always called for political change, and now leader Freddy Lim is making a difference in parliament

Not only has Chthonic’s Freddy Lim helped bring metal into the mainstream in his home country of Taiwan, he’s also actively fighting for a better future. In January, he was elected as a member of parliament for the New Power Party, the political party he helped form the previous year to oppose Taiwan’s oppressive government. For Freddy, his Golden God is an affirmation of his achievements in both music and activism.

“Since we’ve been suppressed by China, it’s very difficult for Taiwan to form an official relationship with other countries,” he says. “Cultural opportunities like this are not just for Chthonic, but for all Taiwanese. It’s very important to get this award and join the 30th anniversary of Metal Hammer, because I’ve read this magazine since I was 14, and now I’m 40! It’s always guided me and let me know good ideas in metal. It means a lot to me.”

Since his election, Freddy has had to prioritise his political duties, but he isn’t leaving his music career behind. “I try to remain the same,” he says. “Traditional politicians will share their statements on Facebook, but I share music. I’m always sharing music and ideas with my supporters. But now, I don’t have the time for touring like before. We got a lot of offers from Europe and America, but we just can’t do it like before.” That doesn’t mean there’ll never be another Chthonic album, though. “Hopefully next year we’ll have some more material and can play some shows and festivals,” says Freddy. For now, he’s concentrating on his new job, and bringing greater levels of democracy to Taiwan. In short, he’s making history.

From pioneering thrash to bringing the noise to rap-rock, they’ve influenced thousands of bands in metal and beyond

It sounds weird to say we’re an inspiration to people, because unless people come up and tell you that, you shouldn’t go around and say that about yourself,” says Anthrax’s Scott Ian. “But over the years, fans and other bands have said that we are an inspiration to them, which we’re very proud of.”

Scott’s aware of the role Anthrax played in shaping thrash, but says that, at the time, all the band were trying to do was play like their idols. “We did something different when we started in the 80s. We changed music; we were a part of a scene that added another branch – thrash metal – to the rock’n’roll tree. We did something new like the bands before us that inspired us – Maiden and Motörhead and Priest. We didn’t know what the fuck we were doing, we just knew we loved those bands and wanted to play like them.”

Coming from the East Coast, Anthrax were an anomaly in the ‘Big 4’ of thrash, but it was a love for the same music that united them. “We had a shitter accent!” he laughs. “But even though we were New York and the rest were LA or San Francisco, we were the same – all into the same bands. Except Cliff Burton. He was into the same bands, but he was already into other shit like REM, he was on another planet already – he was 10 years ahead.”

Nevertheless, Anthrax weren’t afraid to step outside the genre they’d helped create. In 1991, they collaborated with Public Enemy to cover Bring The Noise. It crashed into the UK Top 20, and the two bands toured together in the US, hoping to unite fans of metal and hip-hop. “We grew up in the epicentre of rap,” says Scott. “I’m from Queens, Charlie [Benante, drums] and Frankie [Bello, bass] are from The Bronx. Public Enemy were my favourite rap band. A whole new genre came along, but I’m not taking credit for [rap metal]. We might have opened the door a bit, but Rage Against The Machine broke it down.”

Twenty-five years and 11 albums later, they’re not slowing down. February saw the release of the acclaimed For All Kings, their second album with returned singer Joey Belladonna, packed with spirited songs and killer choruses. They’re on tour with Slayer in the US, and hitting the UK for Bloodstock. As for Anthrax’s ambitions, Scott says that once you’ve flown in Ed Force One, there isn’t much left to do. “You can’t top that!” he laughs. “We’re just doing things on our own terms after 30-odd years, which is something not many bands can say.”

The latest magnum opus from Bethesda Game Studios launched to great acclaim on PC, Xbox One and PlayStation 4 in November last year. Seven months may have passed, but – unsurprisingly given the developer’s impressive pedigree – many of us are still out exploring the irradiated wastelands of Boston in 2287. There’s just so much to do. Bethesda have perfected the art of packing open worlds with interesting characters and quests, great combat and cool secrets. Hell, this time they even tossed in the option for our lone wanderer to show some community spirit and build settlements. But as with their work on both previous Fallout games and the Elder Scrolls series, the studio left the choice of what to do next entirely up to you. It’s their world, but definitely your story. Ambitious game design, flawlessly executed. It’s little wonder, then, this got the nod for Best Game.

In a history-making moment live at Download, we honoured The Game with a special award dedicated to Lem

With this year’s Golden Gods being dedicated to the memory of Lemmy, we decided to rename our iconic Spirit Of Hammer award after the man himself – and there was only one dude big enough to justify it. In a special, history-making moment live on the Lemmy stage at Download, we brought WWE legend Triple H to the UK to receive the first ever Spirit Of Lemmy award in front of more than 70,000 rabid fans.

Presented by Dave Mustaine right after Megadeth’s set and with almost the entire roster from WWE’s NXT division looking on from the wings, Triple H walked out

to a hero’s welcome, his Motörhead-penned theme The Game blaring out of the main stage speakers as the Donington crowd lost its mind.

Remarking on stage that as long as Motörhead’s fans stay loud and proud, “Lemmy will never die”, Trips later opened up to Hammer about what it means to honour his late friend in such iconic fashion.

“For me, there couldn’t be any bigger honour,” he beams. “Ninety thousand fans, the majority of bands playing Download, are here in some way because of Lemmy. This is the biggest honour I could receive. Thank you!”

Aussie crew reach for the skies

After reinventing their sound for last year’s Ire album, Parkway Drive decided they needed an extreme video for their first single, and settled on jumping out of a plane. The training process was tough for singer Winston McCall, a keen surfer but a stranger to skydiving. “It’s easily the most scared I’ve been,” he confesses. “But it was really important for me to do. I’ve always had this fear of heights, so to get my first-ever jump caught on film is so awesome.” The clip shows the band rocking out on an airfield, before suiting up and taking a leap into the unknown. It paid off for the band, and Winston himself. “I’ve got the bug now!” he laughs. “I’m in the process of buying my own gear so I can do it again. It’s been quite the turnaround, ha ha!”