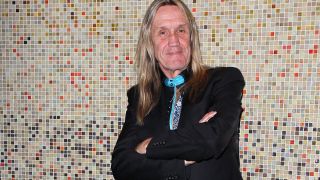 The world tour in support of latest album The Book Of Souls currently only includes one UK date – a headline appearance at Download. And McBrain says if it was up to him, he’d add many more shows in the metal giants’ home country.

He tells Metal Hammer: In Residence on Spotify: “I’d like to see us do some more Book Of Souls tour later on, whether it’s this year or whenever.

“We’re doing one British date. Personally, if it was up to me, I’d like to go back and do a month in England in all the old places we used to play…if we could get the show in. We wouldn’t condense the show because it’s majestic. It’s the best stage show we’ve ever put together in my opinion.”

McBrain adds that he would be happy for Maiden to bring in a new drummer if he was ever unable to carry on playing.

He says: “If I can’t play, if my hands or arms don’t work any more, then I’ll pass the sticks on to someone else.

“There’s too much great music in this band for them not to carry on if I couldn’t do it. I’m not saying that could happen, but I’m not an idiot. I know what my capabilities are and I would never be a parody of myself.”

Despite the Book Of Souls tour having months still to run, McBrain is already excited about the prospect of recording a 17th album.

“We’re a funny breed as a band,” he says. “We have a plan but it doesn’t really take much to put it together. We’ve talked about doing another album, I’d love to do another record.

“In terms of the future, let’s get over this first six months and see where we’re all at after that.”

Metal Hammer: In Residence is available on Spotify now, and includes interviews with Iron Maiden, Ghost, Bring Me The Horizon and Sixx AM. A Spotify Premium account is required to hear the interview segments.