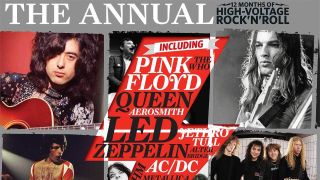 Led Zeppelin
The making of Led Zeppelin III. “Jimmy would say: ‘This is so different, this is going to shock people.’ And it did.”

Deep Purple
All five members look back at the band’s near half-century, and at where their great adventure might take them next.

The Who Fifty years ago they embarked on their first ever US tour. Cue exploding toilets, stinking fish, cop chases…

Alter Bridge
Frontman (and Slash’s man at the mic) Myles Kennedy explains why he doesn’t like fame, didn’t join Led Zeppelin and thinks rock stars are a thing of the past.

Mike Rutherford
The Genesis man on school, women and trips of both kinds.

Jethro Tull
Living in the past? Ian Anderson recalls the making of the band’s 1977 album Songs From The Wood.

Mick Ronson
In 1970 he changed David Bowie’s career, and went on to work with Lou Reed, Bob Dylan, Morrissey and many more. This is the story of rock’n’roll’s most underrated guitar hero.

The Birth Of The NWOBHM
That’s the New Wave Of British Heavy Metal (as if you didn’t know!). We talk to the bands that made the UK heavy again. Starring Saxon, Motörhead, Priest, Maiden and loads more.

King’s X
Adored by, it seems, everyone, they should have been the next big thing. Instead they remain the greatest ever cult band.

Pink Floyd
The greatest Pink Floyd songs – as chosen by us and the stars. And drummer Nick Mason (the only ever-present Floyd member) looks back on six decades of incredible experiences.

Danny Worsnop
After dark days and high times with Asking Alexandria and WeAre Harlot, the singer returns with a country-rock confessional.

Steely Dan
They’re fawned over and derided in equal measure for their slick, precision-crafted albums. This is the story of one: Pretzel Logic.

Brian Johnson
We look back at the former AC/DC frontman’s career, from life as a skint car roofer to stepping into the huge shoes of Bon Scott and conquering the world. Then fate intervened and he was ousted from AC/DC. So what happens next?

John Mellencamp
The roots rocker takes on celebrity, hypocrisy, being misunderstood and not giving a damn about anything.

The Pretenders
“For me, rock’n’roll was always androgynous and irreverent. You weren’t trying to get someone’s dick hard, y’know?” Putting the world to rights with the great Pretender, Chrissie Hynde.

Manic Street Preachers
Ten years after its release, James Dean Bradfield and co. look back on Send Away The Tigers and how it saved their career.

Metallica
At the start of 1987 they were on the edge of a crisis. Then they recorded The $5.98 E.P. Garage Days Re-Revisited. This is the story of how six days changed Metallica’s world.

Uriah Heep
Mick Box - the founding member and stalwart of the band – has been on quite a journey. And he says it isn’t over yet.

The Cult
“We lost a lot of the British goth audience,” remembers bassist Jamie Stewart. But it made them stars. We look at the making of Electric, The Cult’s high-voltage rock’n’roll album.

Aerosmith
As they prepared for shows that may or may not be their last, we caught up with Toxic Twins Steven Tyler and Joe Perry.

Wayne Hussey
The man from The Mission on Dead Or Alive, how he’d like not to die and how he’s enjoying living life to the full.

Megadeth
That the feral delinquents’ 1986 album Peace Sells… But Who’s Buying? was a classic was a surprise. That they’re still here to tell the tale is an even bigger one.

Queen
In the autumn of 1977, it looked as if the band’s reign might be over. Instead they hit back with the globally successful News Of The World and ruled once more.