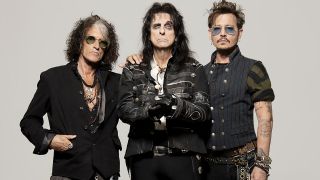 Hollywood Vampires are the latest artist to postpone their 2020 touring plans – moving their UK tour into 2021.

Alice Cooper, Joe Perry and Johnny Depp were scheduled to play shows in Birmingham, Leeds, Glasgow and London in September this this year, with the dates now taking place in August 2021.

Hollywood Vampires have also confirmed that they’ll be joined for the four shows by special guests Killing Joke, with tickets previously purchased for the 2020 dates still valid for next year’s run.

Speaking previously about touring in the UK, Aerosmith guitarist Perry said: “The last tour we were firing on all cylinders and it’s because of the great support from our fans that we really push the pedal to the floor. You can expect much of the same – we can’t wait to get over and prove it.”

Hollywood Vampires are touring in support of their latest studio album Rise, with the band giving fans a taste of life on the road in their video for I Want My Now.