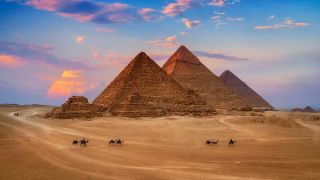 From their occult interests to their apocalyptic conspiracy theories, Killing Joke have always been at the more esoteric end of the rock spectrum. But even by their standards, the idea of recording in the Kings’s Chamber of the Great Pyramid at Giza was a truly unhinged decision.

In August 1993, singer Jaz Coleman and bassist Youth decamped to Cairo for a session for their Pandemonium album. Their contact in Egypt was Egyptology student Mary Lomando, who would help grease the wheels that would allow them inside the Pyramid, while Coleman recruited local musicians to add an authentic flavour.

On paper it looked like a straightforward endeavour. What they hadn’t factored in was the bribery, levitation, exorcisms, and demons lurking in the shadows.

Jaz Coleman: I had recorded in Egypt before, so I was telling Youth how great the studio was, and he said: “We don’t wanna play in the studio. We wanna play in the Great Pyramid, man.” I thought he was completely potty. I’d been working in Egypt for years and I knew how difficult it was to organise anything like that. I couldn’t see that it would be even remotely possible.

Youth: I was attracted by the esoteric, occult significance of the Great Pyramid. Being a pyramid, it has interesting properties – its proportions. It has four sides. And when it was first built it was all covered with marble, and at the pinnacle was a Golden Section proportional to the whole structure, and at the top of that was a diamond, also in the same proportions.

Mary Lomando (Egyptologist/astrologer): When Jaz and Youth arrived they needed somewhere to stay, so I introduced them to my friend Khadija who ran a Yoga retreat near the Sphinx, and they stayed with her some of the time.

Jaz Coleman: Khadija was a very sexy Texan lady, an ex-Pan Am stewardess who had converted to Islam. I couldn’t imagine how she could be an Egyptologist. Let’s put it like this: in Egypt you don’t wear skin-tight jeans and cowboy boots and have your tits hanging out. Then when we went on site with her, all these Arab guys came swarming towards her.

I said: “Are you sure it’s wise to be dressed like that?” She said: “Don’t worry about it. I’ll show you how to deal with these motherfuckers,” and pulled her T-shirt down and said: “Are you lookin’ at my tits, Mohammed?” They were gawping, and she started slapping them round the head, shouting at them, and they all ran off in different directions.

Youth: Another reason to record there was where it is geographically positioned, on the 32 or 33 degree latitude, which is tied in with the earth-energy ley lines. The St Michael ley line, for example, that runs through Glastonbury, continues on through the pyramid.

Jaz Coleman: The pyramids were constructed by a non-human intelligence, for sure. I have no doubts about this. Each foundation stone for the Great Pyramid weighs the same as four jumbo jets. We don’t even have cranes today that can lift those sorts of weights.

Mary Lomando: Having previously done some recording inside the pyramid with [producer/ mixer/engineer] Bob Clearmountain, I knew how to gain access to it. You could pay for private time inside, but there were two rates: a low one for private meditation and a higher rate for commercial uses. I was able to introduce them to the Minister For Antiquities. I believe they paid the lower rate.

Jaz Coleman: I remember sitting with this fat, sweaty fuckin’ Minister For Antiquities and these three American women, and he says: “So you want the Great Pyramid for meditation purposes, yes? Yes?” I kicked Youth, who took out three grand from his pocket, slapped it on the table, and this sweaty hand picked it up. He shoved it in his pocket, saying: “You now have the Great Pyramid for three days.” And the deal was done. Complete bribery.

Youth: We all got to the pyramids a bit late. We got them to turn off the electricity so we just had candle light. It’s an amazing experience. You have to crawl in through these tiny holes, then you come to this massive alien staircase like in a science fiction movie, which you walk up to enter the King’s Chamber. It’s actually quite a small room, yet the reverb goes on forever – made it feel like a big hall or something. It’s got Golden Mean proportions, which gives it mystical qualities. It’s a rectangular shape, coincidentally the proportions of a credit card.

Jaz Coleman: Aleister Crowley had The Book Of The Law dictated to him in there, and when you get into the King’s Chamber it is just awesome to contemplate who and what has been in there.

Youth: So we all crowd in there with the engineers and the video guy, and it’s all funny, fuzzy energy in there.

Greg Hunter (engineer/co-producer): The plan was to record vocals on several tracks, but the first night did not go so well. Everyone was nervous and the vibe was all weird.

Mary Lomando: I went in with them on that first day. They were treating it more or less like an ordinary recording environment. They started having electrical problems because the pyramid has unusual characteristics which were draining their batteries.

Jaz Coleman: We’d brought in eight to 10 hours’ worth of batteries, but the chamber would just drain their power. You could only get 10 or 15 minutes worth of juice out of them.

Greg Hunter: We managed to get one song down and the takes were sterile, unusable.

Youth: At one point Jaz just broke down in tears on the floor. I thought it must have been the brandy and everything. So we chilled out, knocked it on the head and went back to the hotel early. I meditated on it, and realised that pyramids are all about threes. So we wanted three guys – me, Jaz and one engineer – and three women in there. Everybody else stayed in the Queen’s Chamber.

Greg Hunter: We took on a much more ceremonial attitude – lots of incense and smoke.

Youth: I was conducting the ceremony virtually naked with just a very thin lungi round my waist, and I was running about with these burning sage bushes in my hand. I had brought in lots of flowers, garlands, incense, some holy water, and these naturally wand-shaped quartz crystals. They can cut through negative psychic binds. I used them in casting the circle, and I think it made a big difference.

Jaz Coleman: Quartz is used to absorb energy, so Youth thought it might help with the battery problem. And it did.

Greg Hunter: Jaz stood behind the sarcophagus, and Youth and I pointed the quartz wands at Jaz while he was singing. And we kind of screamed at Jaz, and he screamed back.

Jaz Coleman: We had this Nubian guy holding the microphone for me, and then Sameh, our recording engineer, fell asleep while we were doing the ceremony. He woke up with a start and ran out of the pyramid, screaming.

Sameh Almazny (engineer): It’s like a nightmare. These eyes, shiny eyes, come to my dreams many times. From this day, I never go to the pyramids.

Greg Hunter: In the middle of the recording, three women who had been waiting in the antechamber suddenly walked into the chamber wearing full Egyptian ceremonial costumes. It was very freaky, totally unexpected.

Mary Lomando: Khadija would be the one who did the rituals, because she played the harp and sang with the most beautiful operatic voice. She may have been planning to sing with them, because she has an operatic-quality voice, which would set up vibrations.

Jaz Coleman: It was a wonderful moment when they walked in. And Youth, bless his heart, didn’t even recognise them. He goes: “’Ere, Jaz, who are those three weirdos at the back?”

Greg Hunter: That’s when the vibe got really weird, and we started to get some good takes.

Youth: The ceremony worked. We set up the space, and that let it come through. You kind of tap into it, and it came through in Jaz’s performance.

Jaz Coleman: When I go into that state of grace I’m not conscious of anything else. You become it, you personify it. You become a vessel, a channel, a portal. You have passing impressions, but you’re concentrating on the act of doing it.

Youth: There was a point when it seemed like Jaz was levitating, floating in the air in the chamber. It was an amazing scene, amazing sound, an amazing recording. Jaz did these amazing vocals, so we’d got tracks done for Exorcism, Pandemonium and Millennium. When it was over we felt incredible. We all felt totally regenerated and renewed. When we came out there was, like, this festival of Bedouin berbers. They’d set up fires and stuff outside and they were singing and dancing.

Jaz Coleman: There were about 50 musicians all playing drums, and people singing, welcoming us. It was incredible.

Killing Joke survived their brush with the paranormal in the Great Pyramid, and their album Pandemonium reached No.28 in the UK. The session was filmed by director Shaun Pettigrew and features in the forthcoming documentary The Death And Resurrection Show, released in 2012.