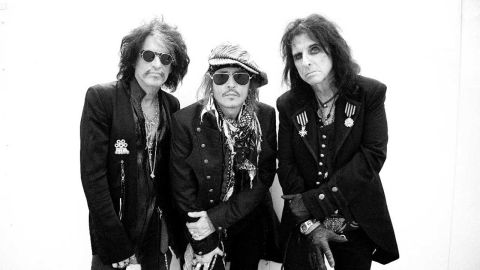 Separating the artist from the art is never the easiest trick to master. So while the presence of Johnny Depp in the band would have been the ultimate cool injection a decade ago, the allegations of domestic abuse made against him by his ex-wife Amber Heard make Hollywood Vampires a rather more problematic listen.

It all leaves a distinctly sour taste, although Depp’s bandmate Alice Cooper was quick to defend him when speaking to Billboard: “All the stuff you heard last year about Johnny, ninety nine percent was just bull. I’ve never seen him look better in my life. I’ve never seen him happier. I’ve never heard him play better. And the way the press would have it is he’s a total destruction and ready to die. Totally not true.”

Whatever the truth of the matter, the whole situation has provided inspiration for the supergroup completed by Aerosmith’s Joe Perry. While their 2015 debut was stuffed with covers of songs by deceased rock’n’roll greats, in a nod to the now deceased members of Cooper’s old drinking club who have passed on to the great dive bar in the sky, this time the scales are tipped in favour of originals that take a defiant stance, from the classic Cooper stomp and swagger of The Boogieman Surprise to Welcome To Bushwackers, a good-old-boy boogie featuring Jeff Beck and John Waters that pointedly stands as an ode to smoking, drinking, fighting, womanising, and all-round bad behaviour. "Nobody tells me what to say or tells me what to do," goes the mantra. "Ain’t got a thing to prove to you, what goes around comes around."

At the other end of the scale are some colossal missteps. We Gotta Rise is basically Vindaloo by Fat Les with a political agenda, while foreshortened piano interlude The Wrong Bandage has more than a whiff of Spinal Tap’s Lick My Love Pump.

There are a handful of covers here, and they’re all reverently respectful to the source material. So while you can never hope to compete with the perfection of David Bowie’s “Heroes”, their version is done flawlessly (if rather pointlessly), as is a raucous romp through the Jim Carroll Band’s People Who Died, while a gorgeous take on Johnny Thunders’ You Can’t Put Your Arms Around A Memory is a gentle highlight at the heart of the album.

Rise is long, sprawling, rather unfocused record that could have done with editing down to the strongest points, but when Hollywood Vampires are good they distil the spirit of classic rock as effortlessly as you’d hope from men of Cooper and Perry’s calibre.