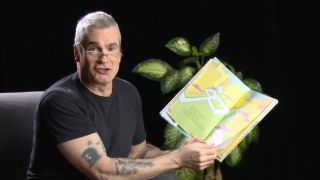 The Black Flag icon reads through the children’s book and light-heartedly points out what he sees as flaws in the narrative.

Rollins takes on equal rights for women, proper care for military veterans, gun control and animal rights – among other topics.

Seemingly annoyed at the poor use of grammar in the sentence, ‘It’s opener there in the wide open air,’ Rollins says: “You’re getting kids at a formative age and you’re teaching them to speak poorly. That’s okay if you wanna be in congress, but it’s not working for me.”

Picking up on another part of the story in which a character’s friends leave him behind in the wild, Rollins says: “What are we teaching children with this? Loyalty? Helpfulness? No, when one of your friends lags behind – screw ‘em.

“Just move on and realise your own destiny. But don’t worry, he’s a rugged American. He’ll be fine. Hopefully he’s got a gun stuffed in there somewhere.”

See the entire video below.

Gloves are off in Stapp's review of Creed the movie