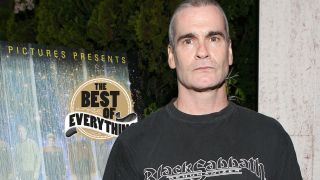 Forget the records he’s released with Black Flag and Rollins Band. Disregard the myriad books he’s published through his own 2.13.61 company. And yes, ignore his appearance on Channel 4’s Full Metal Challenge.

In the run up to the release of He Never Died – his first starring role – and Gutterdämmerung, we thought we’d concentrate on Rollins’ film career, which started with a 1985 short called The Right Side Of My Brain.

Sure, some of the films he’s appeared in were stinkers – Jack Frost and The New Guy immediately spring to mind – but over the last 30 years, he’s managed to get some decent acting parts under his belt.

KISS NAPOLEON GOODBYE (1990)
Co-written and directed by punk singer, poet and artist Lydia Lunch (Henry’s then-girlfriend), who cast herself as the femme fatale in an intense love triangle in this dreamy art-house meditation on love, envy and obsession. It’s young Hank’s first major role, and he gamely gets his arse out for a raunchy shagging sequence on a chaise longue. It’s the best bit of this glorified student project with amusing aspirations to profundity.

THE CHASE (1994)
An abrupt change of mood for this a knockabout Charlie Sheen caper in which Henry plays a stressed-out cop embroiled in a high-octane car chase with a reality TV film crew in tow. According to director Adam Rifkin, Hank’s ad-libs were funnier than the script, so most of the best lines – for example, “You always want to try and keep vehicular intercourse to a minimum” – are his own. This Hollywood action comedy was a crucial film for Rollins; he recently said, “It really busted me out as an actor.”

HEAT (1995)
Sharing a screen together at long last: Al Pacino and Robert De Niro… and Henry Rollins, deftly slipping into the stellar cast of Michael Mann’s much-loved crime classic as an underworld crony who grasses up his boss. It’s a great role for the angry musclebound tough guy, until he gets smacked down and pushed through a plate glass window by Pacino’s skinny little middle-aged copper. Hoo haa.

JOHNNY MNEMONIC (1995)
Sharing a screen together at long last: Keanu Reeves and Dolph Lundgren… and Henry Rollins. Based on a William Gibson short story, this cyberpunk flop featured Hank as an angry musclebound ‘street doctor’ called Spider, who delivers a neat rant against the evil of dystopian technology: “Information overload! All the electronics around you, poisoning the airwaves. Technological fucking civilisation. But we still have all this shit, because we can’t live without it.”

MORGAN’S FERRY (2001)
Escaped convicts Billy Zane, Leonard from The Big Bang Theory and Henry Rollins (cast against type as the angry musclebound one) shack up with the woman from Top Gun in an uneasy truce that goes all saucy. His backside gets another airing in this sedate romantic thriller, although alas his character doesn’t last long – they even included his death scene in the movie trailer.

LIES AND ALIBIS (2006)
Sharing a hotel lobby breakfast table together at long last: Henry Rollins and… Steve Coogan? There’s a brief rapport between these unlikely co-stars, so we hope we get to see Alan Partridge meet Rollins in the Alpha Papa sequel. Playing the musclebound henchman of a Mormon assassin, Hank seems unusually relaxed in this middling scam caper – although he does get to snarl “What the fuck are you looking at?” to a snooty waiter.

SUCK (2009)
Playing the doofus in a ghastly blazer and bad wig, Hank is transformed into egregious DJ Rockin’ Roger in this Canadian rock ‘n’ roll vampire comedy. He’s in good company, appearing alongside Iggy Pop, Alice Cooper, Alex Lifeson and Moby. “Rockin’ Roger’s personality, this absolute annoying person, I brought all that with me,” Rollins confessed to Rolling Stone. “I just made the guy a real jerk.”

HE NEVER DIED (2015)
“I knew I could carry it,” Rollins told fastcocreate.com of his first ever lead role, in this year’s quirky indie comedy horror. “I’m not thinking I’m anything great, but I felt so in tune with this man who can’t die who drinks blood and kills people.” Rollins rose to the challenge so well that his deadpan cannibal outcast may soon be spun off into his own TV series.