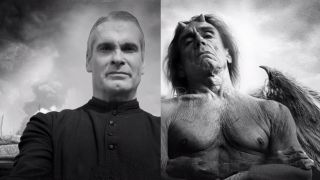 Henry Rollins and Iggy Pop are to appear in a film described as “the loudest silent movie on Earth.”

It’s set to be released early next year, with showings accompanied by a live band and narrator to complete the effect.

Director Bjorn Tagemose explains: “The film is sent in a world where God has saved the world by taking from mankind the Devil’s ‘Grail of Sin’ – the Evil Guitar.

“From Heaven a punk-angel, Vicious, looks upon the world with weary eyes. He sends the Devil’s guitar back to Earth – and sin returns to mankind.

“An evil puritan priest, Rollins, manipulates a naive girl into retrieving the guitar to destroy it. On her quest she’s forced to face the world’s most evil rock’n’roll bastards. She has a rival in the form of a rock chick, determined to stop her.”

Rollins, who’s co-writing the script, says: “It’s primarily a visual experience, with very little dialogue. It’s not a film you see in the traditional way – you’ll be standing up for this experience.”

Hughes adds: “It’s not a fucking Spinal Tap – it’s the real fuckin’ deal and the craziest fuckin’ story you’ll ever see in a theatre.”

More details will be released in due course.