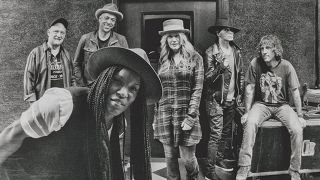 Her sister and Heart vocalist Ann Wilson told Billboard earlier this year that she wanted to take a break from the “constant touring” with Heart – and that’s given Nancy the time to do her own thing.

She tells Billboard: “I was aiming for this summer to be the summer of Heart, where we do the festivals and the European run – but Ann wanted to put her feet into some other areas that were not Heart areas.

“I figured if she’s going to go off over there, I might as well try to build something over there that’s completely fresh.”

Wilson continues: “It’s a really cool new band for me. With Liv Warfield at the front and centre, there’s a whole different rock power that is refreshingly different than Heart.

“It’s still got the rock ethic but there’s a flavour of the R&B that comes through Liv, the way she sings, and her power’s just flattening.

“She wanted to rock and I love the R&B world. We said, ‘We should get together’ and with most people, that never happens. But we followed up on it and it’s really exciting.”

Last August, Ann Wilson’s husband Dean Stuart Wetter, was arrested on charges of allegedly assaulting Nancy’s 16-year-old twin sons – and that could also have been instrumental in Heart deciding to take a break.

Wilson adds: “When something like that happens inside a really tight family, it’s really scarring for everyone involved. There’s a lot of victims besides my own kids in the scenario.

“I think that’s part of the reason Ann wanted to take another direction, until that stuff’s more resolved. I hope it can and I think it will. Time is the healer. I’m just wishing and hoping for the best. The thing to do is go forward, and be positive and stay as affirmative about everything as possible.”

Watch the video for Roadcase Royale track Get Loud below.