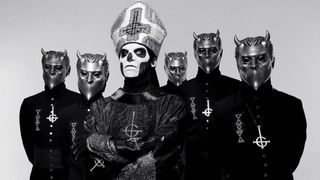 Ghost leader Papa Emeritus, aka Tobias Forge, is being sued by four former band members, according to Swedish website Corren.

The un-named musicians have brought the lawsuit against the vocalist at Linkoping District Court, Sweden, for “missing wages and allowances for several years” and are asking Forge to disclose the band’s revenue and expenses between 2011 and 2016.

Corren say that Forge is in charge of the band’s “operations” and has been collecting “all revenues” through his company.

The four former Nameless Ghouls claim they did not receive any compensation in 2012 but were eventually paid sporadic amounts when Forge was put under pressure. The frontman allegedly claimed there was no money available at the time.

It’s also claimed that on two separate occasions in 2016 the musicians were offered contracts, but those were rejected on the grounds that they saw them to be “slave contracts.”

Former Ghost musician Martin Persner, who revealed his identity last month, is not included in the quartet taking Forge to court.

Ghost are currently on tour across Europe and will play Cologne’s E-Werk tonight (April 5).

Getting to know Ghost: The Swedish ghouls answer your questions