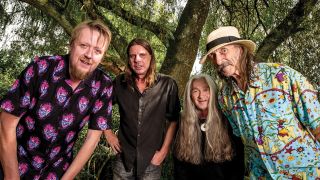 Hawkwind have announced they will release a new album, their 32nd, on October 25 through Cherry Red. All Aboard The Skylark sees the band return to their space rock sound of Top 40 albums The Machine Stops Here (2016)  and Into The Woods (2017) after the orchestrated Road To Utopia (2018).

The album comes with a bonus disc of acoustic covers inspired by the band opening their last tour with an acoustic set of Hawkwind classics. The band entered the studio and recorded Acoustic Daze, which features the following tracklisting:

Hawkwind have also announced a full UK tour. This year has already seen the band headline the acoustic stage at Glastonbury, perform at this year's Graspop in Belgium and host their annual Hawkeaster festival.

They are currently planning a special 50th Anniversary Hawkwfest at the end of the year. In the meantime they will play: