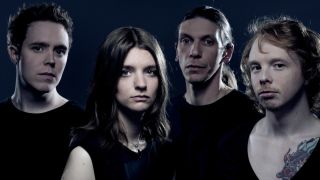 hAND have streamed third album Kintsugi in full with Prog, ahead of its release next month.

Described as falling somewhere between Opeth and Amplifier, the follow-up to 2011’s Breathing was recorded in two different versions. The standard editions are accompanied by a Gold Edition, which sees Kat Ward and co rebuilding their material from the ground up, and applying different production values to the results.

hAND explain: “We managed to stay quite true to the concept – we set about building the album as we would like it, completely finishing it before working through the second time.

“It was quite liberating to take the more traditional, dynamic approach. As well as revealing more detail and giving instruments more space to breathe, nuances and expression are surprisingly forthcoming.”

Kintsugi will be released on November 3 via Brutal Elite and it’s available for pre-order now.