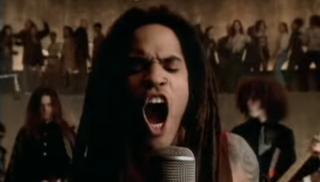 To celebrate the 30th anniversary of Let Love Rule, Lenny Kravitz has announced an exclusive UK date at The O2, London on Tuesday 11 June 2019. Support comes from Corinne Bailey Rae and protest rock collective Brass Against. Tickets are available from AEG.

When you think of the greatest music videos ever made, straight away you probably think of Queen’s Bohemian Rhapsody, Michael Jackson’s Thriller, Peter Gabriel’s Sledgehammer, or some other over-rated, over-watched old eye-candy like that. Maybe Johnny Cash’s Hurt if you’re in a thoughtful mood.

A video that's often overlooked is the promo for Are You Gonna Go My Way? by Lenny Kravitz, rock’s renaissance man.

Few songs from the 90s sound as timeless or as classic. Loads of bands have payed homage to Jimi Hendrix – Kravitz didn’t just pay tribute, he wrote a song that could stand side by side with the tracks on Jimi’s Are You Experienced? album, a Manic Depression for modern times.

The video meanwhile, took the angst and dread of Nirvana’s Smells Like Teen Spirit promo and transformed it into something positive. Vibrant, sexy, stylish – in an era of transient pop it was rock’n’roll remodelled, a smart, swaggering call to arms for rock classicists.

This is Lenny Kravitz all over. The rock renaissance man. Forward thinking, fighting the good fight, up-ending conventions, refusing to take the easy route, ignoring the safe option. In his early days, record labels told him that his music wasn't ‘black enough’ – or that it was ‘too black’. In 1990, his third single from the Let Love Rule album, Mr Cab Driver, was addressed to a racist taxi driver. It could have been the record business itself. (‘Mr Cab Driver won't you stop to let me in/ Mr Cab Driver don't like my kind of skin/ Mr Cab Driver you're never gonna win’).

He wrote songs for Madonna, Steven Tyler, recorded with Mick Jagger, played guitar for David Bowie, and covered a Kiss track with the help of Stevie Wonder – since then he’s worked with Michael Jackson and Jay-Z, won Grammys and soundtracked Hollywood movies.

If Hollywood seemed like the next obvious stop for an image-savvy charismatic performer, no-one could have predicted that his debut acting role would be Precious, a hard-hitting drama about an obese teenager and her abusive family. His role as Cinna in The Hunger Games, meanwhile, brought him to millions of viewers in a blockbusting franchise that challenges conventions: an action movie with a female lead, a sci-fi movie that isn’t about space ships or lazer guns, a piece of massive entertainment with a subversive message: that the ruling classes use dumb entertainment to keep the workers placated.

As he embarks on a massive European tour, here are six stone-cold classics from Kravitz...

Are You Gonna Go My Way?

A stoned Kravitz had casually scribbled the lyrics for this song on a takeaway bag, but the resulting track – a huge hit single; the album was a UK No.1 – became his stomping signature tune, with a riff that took three cycles to sear itself on to your cortex. Like a dreadlocked Pied Piper, we followed him in droves.

A song from the sharp end of New York, Kravitz’s third single was tracked on the day after the singer tussled with a racist cabbie:. “We were fighting on top of the cab and, y’know, he was calling me nigger. And it got really out of hand.” From Let Love Rule (1989).

Always On The Run

Between the snake-charmer riff, the parping brass, Slash’s stunt-guitar solo and that endearingly daft middle-section where Lenny pretends to be on the phone to his dear old mum, this lead-off single from Mama Said remains the high-water mark.

The collaboration with Slash came out of nowhere. The two men had gone to the same school, but didn't know each other. When they met at the American Music Awards and realised the connection, they knew they had to work together.

“We started to jam and that riff to Always On The Run ended up coming out," Kravitz told Guitarist magazine. "I actually think Slash had been honing it before he got there. The song just wrote itself. To cut the track, he played the riff, I was on the drums. So it was just guitar and drums – that was it – and we got through the take and then I played my guitar part, which is the counter- rhythm part. Then I played the bass. He played his solo and then I wrote the horn arrangement, had the horn players come in and that was that. Did the vocals. It was a great session. Really fluid, it was very quick and spontaneous. That’s how that went down.” From Mama Said (1991).

What The Fuck Are We Saying?

It might have been overshadowed by the embarrassment of hit singles on its parent album, but this five-minute slow-burner has aged well: a protest song that rides on clanging piano, an F-bomb chorus and the best sax break that Clarence Clemons never played.

The song that came to Kravitz as he gunned his Jeep along the beaches of his Bahamas retreat, Fly Away also gave the singer a UK No.1, and Grammy for Best Male Rock Performance. Not bad, considering the lyrics are essentially a rewrite of Orville The Duck’s I Wish I Could Fly. From the album 5 (1998).

It sounds out of step with today, and a lesser artist would struggle to pull it off – it’d be sleazy, leering. With Kravitz it remains sexy-not-sexist, partly because of his restrained, commandeering performance. Lenny is no goon – no Vince Neil rolling his eyes and licking his lips – he’s the alpha-male eye candy that provides balance to the female flesh. Lenny’s women aren’t strippers or tarts: they’re independent and strong. Again, it’s classic rock’n’roll, remodelled. Available on Greatest Hits and Austin Powers: The Spy Who Shagged Me soundtrack.

It’s Kravitz all over. A rock, funk and soul singer who can write massive pop songs, record with the biggest artists on the planet, who’s synonymous with glamour and sex appeal but can appear as a nurse in a gritty-drama and add some soul to a sci-fi blockbuster. A quarter of a century on from his debut album, he can do anything he wants to do.