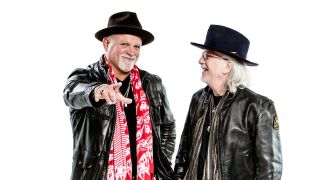 In 1981, Brad Whitford and Derek St Holmes teamed up and recorded the Whitford/St Holmes album. Given the two guitarists’ pedigrees with Aerosmith and Ted Nugent respectively, it was a highly anticipated collaboration, and the album was packed with commendable anthemic blues rock. But the project quickly faded when Whitford rejoined Aerosmith in 1983. St Holmes subsequently worked with Michael Schenker and on the soundtrack for the film Dazed & Confused, among other projects, before teaming up again with Nugent in 2014.

Recently the two guitarists re-formed Whitford/St Holmes and released the melodic, energetic Reunion, a record which shows they’ve got a contemporary streak.

Why have you reunited now?

Brad Whitford: That’s down to geography. For years the two of us have lived in different cities. But now we’re both just outside of Nashville, so it seemed only natural to hook up. We began hanging out, jamming and playing around town.

Derek St Holmes: It was never our plan to restart this band. But we were coming up with so many great song ideas that we thought we should go into a studio and see what happened. So we did a few songs, and some things worked, others didn’t. But both of us were inspired enough to get a line-up together and take it seriously.

What do you see in each other that makes this work?

BW: Working with Derek is so easy. He puts the music before anything, and is very encouraging. On this album, for the first time I have written lyrics. And he really pushed me to do it. Derek took what I had done and has literally made it work. He wants to bring out the best in me.

DSH: We are both Pisces and our birthdays are one day apart. And it’s amazing how much we think alike. We’ll turn up somewhere, both wearing the same colour clothing, or with the same colour guitar strap. We have that sort of close relationship.

Will the band be a long-term thing?

BW: I think it will be. I have a lot of time available now Aerosmith are working less and less. We want to tour not only in the States but also in Europe, and we’ve been in the studio already doing tracks for a new album.

DSH: I see this as a new band for both of us, and one we want to make work in any way we can. Ted Nugent is very excited by what I’m doing. So much so that when I told him I wouldn’t be available to tour with him later in the year due to Whitford/St Holmes commitments he was completely supportive of what I am doing. We are already working on the next album. And we desperately want to tour in England. We never got there first time around. A lot of our sound comes from English bands.

Why did Whitford/St Holmes last for just one album the first time around?

DSH: When we got to the end of our touring schedule, Brad was asked to return to Aerosmith and Ted wanted me back. We felt we had to do those things. Brad has lasted a long time with his band, because they’re smart guys. Ted… well, he was and still is very
self-centred, which is why I have been in and out of his band.

BW: It kinda imploded. We did a US tour, and then Derek got the call to rejoin Nugent and I went back to Aerosmith. Maybe that’s why it feels so fresh now, because we were only together for such a short time.

You’ve both worked with mercurial characters. How do you cope with that?

BW: Ha! It’s not easy. I have had to deal with massive egos in Aerosmith, and arguments about who is more famous than who. To get anything done you have to find your way through a minefield. Sometimes I wonder how I’ve coped. Part of it is the money I’ve earned, which has been very big. And also being in Aerosmith, the doors have opened. But it’s been a colossal pain in the ass.

DSH: I suppose I know how to keep my mouth shut around Ted. I have learnt over the years to let him have enough rope to hang himself, and then come in to try and rescue him. Ted is a lot kinder to me these days, but his ego is still enormous. However, let’s not forget that Ted is a very strong guitarist, which makes it worthwhile. Well, partly worth it, anyway.

Brad, do you have any plans to wrote an autobiography, like other members of Aerosmith have done?

BW: Everything that can be said about Aerosmith has already been written, so I won’t do another book like that. However, I am working on a science-fiction novel. As a kid I was fascinated with UFOs, and I began to write a screenplay based around this interest. But now I think it will work better as a book. And I also have plans for a second one.

Derek, how do you feel about David St Hubbins in Spinal Tap being named after you?

DSH: I love it. The guys behind Spinal Tap came on the road for a week when Ted was out with Kiss, and then they came for another week when we toured with AC/DC. They made lots of notes, and got some of the ideas used in the film from us. And why do you think the bassist is called Derek Smalls? I’m sure they decided to call him Derek after me.

You’ve both already done a lot musically. Do you still have any unfulfilled musical ambitions?

BW: Being in Whitford/St Holmes again is enough for me. This is the best band I’ve ever been in. But I am constantly getting fresh inspiration from young bands like Rival Sons. They prove rock’n’roll is still exciting. And that spurs me on.

DSH: Brad and I are planning to do a contemporary blues album after the next Whitford/St Holmes one. Our idea is to pull in people like Buddy Guy and Walter Trout. And those are the sort of musicians I would love to work with. Walter has already says he’ll do it.