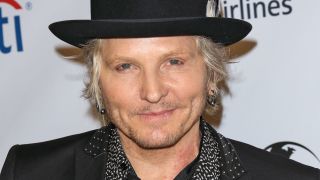 The lineup have delivered three shows, with festival appearances and a North American tour to follow, featuring Frank Ferrer behind the kit alongside guitarist Richard Fortus and keyboardists Dizzy Reed and Melissa Reese.

Speculation ran high ahead of their surprise club set in Los Angeles that Sorum might take part, with his predecessor Steven Adler expected to play a guest role – but neither of them appeared.

Asked by Twitter user @davidblade69 if he was planning to join GN’R at any of their upcoming shows, Sorum has replied: “No sir, they didn’t ask me.”

The message has since been deleted. But asked in a follow-up whether he was watching any performances, he says: “Watching final season of Downton Abbey.”

Sorum is gearing up to tour North America and Europe with supergroup the Hollywood Vampires alongside Alice Cooper, Joe Perry and Johnny Depp. Meanwhile, GN’R will perform with Rose using Dave Grohl’s stage throne after breaking his foot last week.