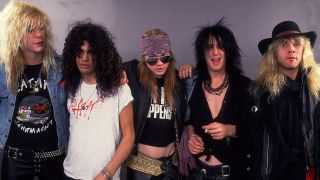 If anyone in Guns N’ Roses had an appetite for destruction, then it was drummer Steve Adler. While the rest of the band found a way of precariously balancing on the precipice, he was the one who regularly fell off the edge. His addictive behaviour was so extreme that, when in 1993 a lawsuit the drummer brought against the band was settled with an award of just over $2 million, Slash sighed: “All we’ve done is give him the money to buy enough drugs to kill himself.”

Adler felt his world cave in when fired from GN’R in 1990. “I was stunned. The thing was, we were a gang. So often I’d get into fights in bars defending them. To me, I had my dream taken away. But there again, I understand now why they had to do it. I was out of control, and didn’t even realise.”

Adler’s demise was accelerated by a story during the recording sessions for the Use Your Illusion albums that he’d given a heroin shot to Erin Everly, then Axl’s fiancée. It’s claimed that this had been done to calm Everly down, after she’d had a major row with Axl. Adler denies it to this day, claiming instead that she turned up loaded on prescription drugs, but this was a low point from which he never recovered, as far as GN’R were concerned.

“We went from doing drugs together to going off and doing them on our own. The love and bond between us was shattered.”

In 1996, Adler suffered a stroke after taking a speedball (a cocktail of heroin and cocaine), and later had a second one. The combination has left him with a definite speech impediment. Things got even worse when, in 1997, he was charged and convicted on a charge of domestic violence. Two subsequent, and similar, incidents a year later led to a term in jail.

But in 2000, Adler seemed to be getting himself sorted out, as he moved to Las Vegas and began to piece his life back together.

“It was a case of either doing this, or dying. Simple as that. But I did find it very hard to give everything up.”

Things reverted back when, in 2008, he signed up to be part of the reality TV series Celebrity Rehab, which purports to show people in the public eye dealing with their addictive problems. But Adler’s presence on the show only accentuated his inability to deal with such matters, as he became suicidal and went into denial about his problems. “That’s the hardest part of all, admitting to yourself you’re an addict. Once you can do that, the rest is so much easier.”

In January 2009, he was arrested again on drugs charges, and put through yet another rehab programme. Only this time it seems to be working, as Adler slowly gets himself back on track.

“One thing that’s definitely helped me has been working again with Slash,” admits the drummer. “He’s been clean for a few years, and when he asked me to play drums on one song (Baby Can’t Drive) for his self-titled solo album, it was the boost I needed. At last someone was showing confidence in me.

“Slash and I go back such a long way; we were school pals. To have him back in my life is huge for me. Right now, the thought of not letting him down is enough to keep me together. I really want to take the break he’s given me here and make it work. I owe him so much for this.

“I’ve come to realise that, because of my drug addiction, I missed out on so much. I have nobody to blame but myself, however I am just grateful to be alive and to be able to have a career again.”

More than anyone else, Adler would love to see the Appetite For Destruction line-up of GN’R back working together, even though that would bring inevitable temptation.

“It’s just crazy not to do it, right? How huge would it be? I would love to see the five of us back working together, because I know it would be magic.”

Right now, Adler is taking it day by day, as any addict has to. He appreciates that the temptation will always be there, and can’t promise never to relapse.

“All I know is that right now, I am just so happy with what’s going on. I am now being driven by the music.”

Here, then, is perhaps the greatest survivor of Guns N’ Roses. The one man who so nearly destroyed himself by living up to being in the Most Dangerous Band In The World.

This was published in Classic Rock issue 145.