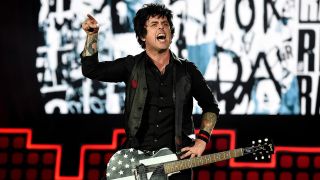 Green Day’s Billie Joe Armstrong has lashed out at a Donald Trump-supporting fan on his Instagram feed.

The vocalist and guitarist posted an image of the US president’s recent tweet, where Trump boasted that he had a “bigger and more powerful” nuclear button than North Korean leader Kim Jong Un.

Armstrong said: “This isn’t funny. This is our president acting like a madman, drunk on power threatening to kill innocent starving people by way of nuclear war.

“The 25th amendment needs to be enforced. This man is sick and unfit for office. I don’t care if your liberal or conservative, this has to stop.”

Alternative Nation report that when one fan said that “people have the right to support Trump,” Armstrong shot back: “Well then go fuck yourself you stupid piece of shit.”

He added: “If that’s the way you feel about mass destruction and murder then fuck off. Stay the fuck off my Instagram and don’t come back. Don’t listen to my fucking records.

“I have no problem telling ignorant fucks like you to go to hell. That goes for any other stupid fucks that think this behaviour should normalised. Get the fuck out!”

Armstrong has been a vocal critic of Trump since the business mogul won the US presidential election. During the band’s performance of Revolution Radio track Bang Bang at the 2016 American Music Awards, Green Day broke into a repeated chant of “No Trump, No KKK, No fascist USA.”

The chant is a variation on the chorus from punk outfit Millions Of Dead Cops (MDC) track Born To Die, released on their 1982 self-titled debut album.

American Idiot: Revisiting the album that made Green Day stars