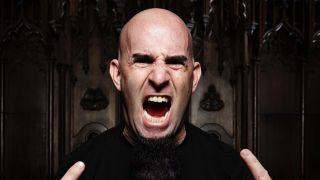 Anthrax guitarist Scott Ian says the Grammy Awards “mean nothing” to him.

He spoke out following rumblings in the metal community about Tenacious D’s win in the Best Hard Rock/Metal Performance category at the recent annual event for their cover of Dio’s The Last In Line from the 2014 Ronnie James Dio tribute album, This Is Your Life.

Anthrax were among the nominees in the category – for their cover of Black Sabbath’s Neon Knights from the same project – but Ian says he could care less about the honour or the event.

Dio’s widow and manager Wendy was thrilled with Tenacious D’s win and the victory phone call she received from Black. Proceeds from This Is Your Life benefit The Ronnie James Dio Stand Up And Shout Cancer Fund. The singer died on May 16, 2010 from gastric cancer at the age of 67.