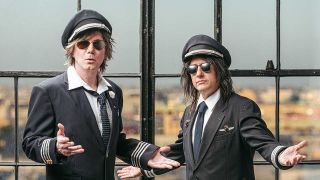 Goo Goo Dolls have released a video for Lost, a thoroughly modern slice of pop-rock with a chorus that soars towards the heavens.

It's the fourth single to be taken from the band's current album Miracle Pill, and follows in the footsteps of earlier releases Miracle Pill, Money, Fame And Fortune and Indestructible.

“The song reminds me that we all make mistakes and lose the plot of our own stories sometimes," says singer John Rzeznik. "We get distracted with the cheap, shiny, sights and sounds of a world in disarray but ultimately, we find where we need to be if we keep our eyes open for what really matters."

Video director Joelle Grace Taylor says, "When I was asked to shoot the video for Lost I wanted to film it from the perspective of one single character, Madolyn. To me, the song is about learning to trust yourself and embracing parts of you that may have been missing.

"I drew inspiration from my own past as well as the star of the video, Madolyn Ropell. The lyrics really hit close to home with past experiences of broken relationships, whether it be romantic / family / friends. By following Madolyn on her journey of self-discovery, I wanted to show that it isn’t easy to let yourself get lost but it’s worth it when you gain total freedom to find yourself."

She continues, "I hope viewers will connect with the character in the video and be inspired to live a life unafraid. It’s not easy to change and grow; you will cry, you will laugh, you will doubt yourself and love yourself and it’ll all be worth it."

Goo Goo Dolls kick off their UK tour on February 19 in Glasgow, and complete the six-date run of shows at London's Roundhouse on February 27. Full dates below.

“I love playing the UK, the audiences are amazing," says Rzeznik. "We always have a blast so it’s a real pleasure to be coming back."