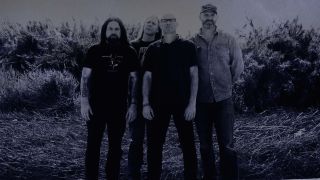 Goatsnake have released a stream of Grandpa Jones, taken from the band’s forthcoming album Black Age Blues, the follow-up to 2000’s Flower of Disease.

“Grandpa Jones is one of the first of the new songs we wrote,” says guitarist Greg Anderson. “It channels Flag and Sabbath (that ole’ mouldy chestnut!), with lyrics about keeping the yout juice flowin’! The backing vocals are courtesy of Dem Preachers Daughters.”

Black Age Blues is released on Southern Lord Recordings on June 1, and preorders for the album are now live. Check out the preorder options at the new Goatsnake store, via BandCamp and iTunes. The band are currently on tour, and play Bristol’s Temple Festival on May 30.