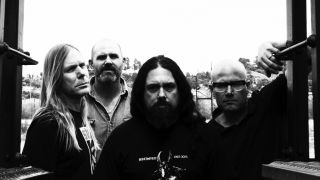 Fronted by scene legends Pete Stahl (vocalist with Washington DC hardcore troupe Scream, Dave Grohl’s pre-Nirvana band) and Greg Anderson (head honcho at Southern Lord records, and one half of drone metal pioneers Sunn O))) ) the band’s resurrection as a recording unit follows a series of sporadic festival appearances, which guitarist Anderson acknowledges “lit a spark under our asses. We were all like, ‘Wow, these old dudes still have something going on!’” he laughs.

Fifteen years is a long time-out for any band: what took you so long?

Well, this band has been on and off since its inception, because everyone has other commitments, whether that’s family or other bands. Playing shows again was really cool, but I wasn’t interested in just playing these songs that I’d written in the late 90s over and over – as much as I’m honoured that people still want to hear them, to me it’s more interesting if we’re creating something new. When we finally got time to do that, the music came together pretty naturally and quickly.

Was the band splitting purely down to everyone’s commitments elsewhere?

Strictly speaking, we never split up, we were just on a semi-permanent hiatus [laughs]. There was never any bad blood, we were always friends. So when we got together again properly, we were just like, ‘Let’s see if we can still actually write a song’ and before we knew it we had 11 songs we thought were really cool. Then it was a matter of getting them documented before everyone disappeared again.

Black Age Blues sees the band reunited with Nick Raskulinecz, who produced your last album, Flower Of Disease, and has since worked with Foo Fighters, Mastodon, Rush, etc.

Yeah, it’s funny, when we started working with Nick in 2000 he was fresh off the bus from Knoxville, Tennessee, and he was young and just hustling for work. And since then, the guy’s career has absolutely exploded. When I called him up about this record he flipped out, he was like, ‘Man, I’ve been waiting for this for years!’ He’s amazing, one of my favourite people I’ve ever worked with.

Ha, ha. Well, I’m not comfortable disclosing the details, but it was definitely a bro deal. I’m not saying that he owes us at all, but it was during our previous sessions that he first met Dave Grohl, because Pete [Stahl] and Dave are friends, and obviously working with Foo Fighters propelled him into that big league.

Speaking of returning favours, Pete Stahl took Dave Grohl into Scream, and you released his Probot record on Southern Lord, so is there no chance of him sneaking a little Goatsnake action onto the Foo’s upcoming Wembley Stadium shows?

Ha! Dave is one of the coolest dudes ever, and a great friend, so we’re ready if we get that call! But we’re coming back to the UK for the Temples Festival, and that’s going to be fun. We’re not at a point in our lives where we can get in the van and tour for 10 months of the year, so every show is special. We won’t be in your faces too often, I promise you won’t get sick of seeing us.

Black Age Blues is out on June 1 via Southern Lord Records.