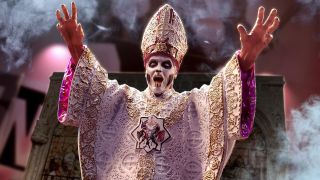 The latest in the KnuckleBonz range of Rock Iconz figures has been revealed – and it’s Ghost’s Papa Nihil and two Nameless Ghouls who are set to join the ever-growing lineup.

Papa Nihil stands at 9-inches tall, while the guitar-slinging Ghouls are 8.5 inches in height. All are hand-painted and will come with a certificate of authenticity – and there will only be 3000 of each package.

The Ghouls will come in a pack of two, while Papa Nihil will be available as a standalone figure and a bundle with stage set backdrop. Check out some product shots below and find out more on the KnuckleBonz website.