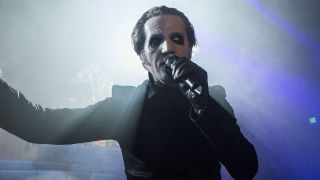 Last week, Ghost released a stream of their new single Dance Macabre – and they’ve now followed that with a star-studded video to accompany the track.

Ghost say: “We wish to inform you that Dance Macabre has infested the nation.

Prequelle will be released on June 1 via Spinefarm Records and is now available for pre-order from Amazon.

Ghost are the cover stars of the new issue of Metal Hammer, which is on sale now. The magazine also features Parkway Drive, Korn’s Jonathan Davis, Maynard James Keenan, Dimmu Borgir and much more.