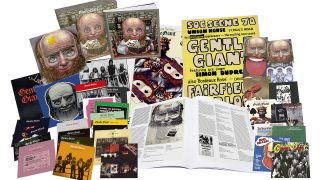 A fully authorised box set celebrating Gentle Giant’s back catalogue titled Unburied Treasure is to be released on December 6 through Madfish.

The limited edition collection will be spread across 30-discs and contain all 11 of the band’s studio albums, along with 15 live concerts – seven of which have never previously been released, while a further seven have never been officially released.

In addition, Unburied Treasure will include bonus tracks and Gentle Giant’s self-titled 1970 debut album which has been remixed by Steven Wilson and presented on a Blu-ray featuring the high resolution 96/24 Stereo LPCM mix, 96/24 5.1 surround LPCM and DTS-HD 5.1 surround mixes and instrumental mixes of the record.

The other 29 discs have been newly remastered by Pete Reynolds, while the box set – which is limited to just 2000 copies – will also feature a 136-page coffee table hardback book, a 96-page tour history book and signed photographs by Derek Shulman, Ray Shulman, Gary Green, Kerry Minnear and John Weathers.

The Unburied Treasure cover art has been created by Bob Venables and is based on George Underwood's original design which appeared on their Gentle Giant’s 1970 debut.

The collection will also include two replica posters: The first from their first show at Portsmouth Polytechnic in 1970 and famous The Power And The Glory artwork.

Other items included are a replica Playing The Fool booklet, a Giant For A Day mask and a replica ‘missing piece’ jigsaw. One randomly chosen box set will include the missing golden piece, which, when claimed, will reward the owner with The Power And The Glory screen printed mirror.

Unburied Treasure is available to pre-order direct from Madfish’s online store, where a full tracklist for the 30-disc collection can also be found.

Find the box set contents below, along with a trailer for the collection.