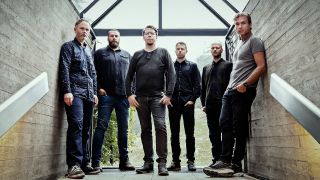 Norwegian proggers Gazpacho have streamed brand new song Fireworker. It's the title track from the band's upcoming new album, which will be released through Kscope on September 18.

Fireworker, like most Gazpacho releases, is a conceptual affair, dealing with the idea that humanity has always been controlled by an infallible and omniscient creature determined to propagate at any cost. A such, it's the culmination of the themes and techniques that’ve decorated earlier collections, combining the fatalistic isolation of Night and Missa Atropos; the ill-fated narrative drama of Tick Tock and Soyuz; and the hefty theological/scientific contemplations of Demon and Molok.

“There’s an instinctual part of you that lives inside your mind, separate from your consciousness. I call it the Fireworker or the Lizard or the Space Cowboy," explains keyboard player Thomas Anderson. "It’s an eternal and unbroken lifeforce that’s survived every generation, with a new version in each of us. It’s evolved alongside our consciousness, and it can override us and control all of our actions.” In order to get us to do what it wants, he clarifies, the Fireworker will silence the parts of our mind that feel disgust or remorse so that we’re unable to stop it.

The conscious part of our mind, Andersen notes, will actually “rationalize and legitimize” those thoughts and actions so that we never discover the beast behind-the-scenes. No matter how we feel about ourselves in terms of identity, accomplishments, and value, we’re all just vessels—or “Sapiens”—that the creature uses until it no longer needs us. “If you play along,” Andersen explains, “It’ll reward you like a puppy and let you feel fantastic; if you don’t, it’ll punish you severely.”

Inevitably, due to the current covid-19 situation the band’s European and UK dates scheduled for October 2020 have been postponed, but as the band didn’t want to disappoint their fans Gazpacho are planning to play Fireworker in its entirety via a livestream, alongside a Q&A about the concept plus will play a few favourites from their repertoire. Details of the event will follow soon.