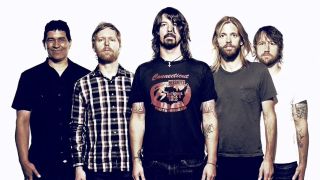 Foo Fighters have added God Damn and Honeyblood to their list of support acts for the UK tour that kicks off later this month.

Dave Grohl and co start their run with an appearance at BBC Radio 1’s Big Weekend in Norwich, and end it with a set at this year’s Glastonbury festival.

It’s part of a wider Foos European tour in support of eighth album Sonic Highways, which was accompanied by an eight-part documentary series of the same name.

Grohl was ambassador for last month’s Record Store Day, and led the charge with an intimate Foos show for 150 fans in an Ohio store. The band this week released a video of the event.

May 25: Sunderland Stadium Of Light – with Kaiser Chiefs

May 30: Slane Castle – with Hozier, Kaiser Chiefs, Ash, The Strypes