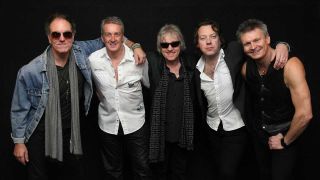 London AOR favourites FM have released a video for Killed By Love. The song is taken from the band’s eleventh studio album Atomic Generation, which was released in March. It's a typically glistening shot of upbeat melodic rock, with a chorus bigger than adult elephant.

“Killed By Love is one of the more commercial tracks on Atomic Generation," says frontman Steve Overland. "It’s going down really well with the fans at the shows and we have some great audience participation going on with this song. It seems to be a fan favourite already! We shot the video at Koko in Camden earlier this year. It’s just a good fun performance video."

The band have recently returned from their first show in the US, where they headlined the Sunday of Melodic Rock Fest 5 in Chicago. The other two headliners were Swedish acts Treat and H.E.A.T.

“We’re blown away by the response to Atomic Generation," adds Overland. "We’ve had some of the best reviews of our career. We knew that we’d made a good album but until it’s out in the world you never really know.”

FM kick off a short UK tour this month, before heading of to Malmö for the first Swedish edition of Melodic Rock Fest, where they'll headline the final night. The band then return to The UK and play the O2 Ritz in Manchester on June 9, before going on to play the Leicester Rocks Festival on August 18.

Atomic Generation is out now.