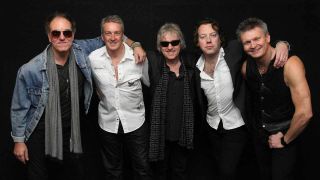 AOR stalwarts FM have released a video for Playin’ Tricks On Me. The song is taken from the band’s upcoming eleventh studio album Atomic Generation, which is the follow-up to Indiscreet 30 and released on March 30.

“To be perfectly honest, Playin’ Tricks On Me wasn’t originally written for FM,” says frontman Steve Overland. “I wrote it somewhere around 2009 for a blues artist, but for whatever reason the song didn’t make it onto his album. I played it to Merv [Goldworthy, FM’s bassist] after stumbling across the original version and he loved it. He was like, “Wow! This is a great song, we’ve got to do it.” And that was that. The original version of the song doesn’t sound like FM at all, but once we all got together in a room and started playing it quickly started sounding very much like an FM song. It’s fair to say we FM-ed it!

“We’re really pleased with how it came out. It’s reminiscent of a lot of the music that all of the band grew up with. It’s a great blues-soul track with a slight Latin vibe, which is something a little different for FM. That said, it’s one of band’s favourite tracks.

“We recorded the video at the KOKO venue in Camden, along with videos for two other tracks from the Atomic Generation album - Black Magic, and another that we’ll reveal shortly!”

Atomic Generation was produced by FM at Coal House Studios and West3 Productions.

“I think this is the most mature and complete FM album we’ve made,” says Overland. “It has old-style FM tracks along with some tracks drawing on the music that we grew up with. The band seems to be getting better with age. The momentum and enthusiasm just goes on and on. This is FM 2018.”

The album is released on March 30. The band head out on tour next month, and will play their first-ever US show in May at the MelodicRockFest in Chicago (full dates below).