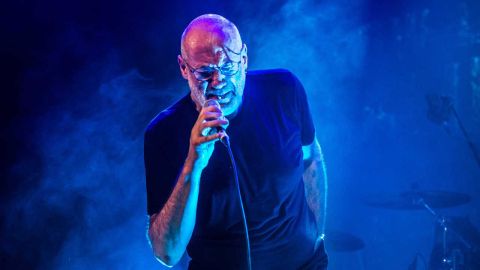 You haven’t lived till you’ve witnessed a gung-ho crowd of (predominantly) fifty-something men bellow along to “do you remember loving on the floor in Belsize Park?” with a lager in their hand and a tear in their eye.

Fish is performing the 1985 Marillion album Misplaced Childhood album in full for two nights here, and this tour – Farewell To Childhood - is the last time he’ll ever do so. He makes much mockery of the degeneration in his and our physical beauty over the thirty years since the album catapulted his former band to fame. Yet once the opening keyboard notes slide in and we’re all “huddled in the safety of a pseudo silk kimono”, things get serious. An album that’s loaded with crescendos and diminuendos makes for a moving, dramatic and uplifting show, honoured by the audience like Sinatra’s crooning My Way for the final time.

Fish makes cracks about his age and ailments (he’s 57, seems to think he’s 77) and the tall, bald, bespectacled Scot is inevitably different from the theatrical, slightly intimidating character who fronted Marillion’s breakthrough. Yet that peels away swiftly as the music drives through the (chart-topping) concept work which led neo-prog but, for all its overt Genesis and The Who rock-opera influences, stands strong as a fusion of intense, inspired lyrics and volcanic and vulnerable suites. It’s especially impressive that Tony Turrell only stepped in on keyboards a week ago, saving the UK tour from cancellation after John Beck broke his arm.

The show’s opening half-hour warms us up with more recent solo material, like Feast Of Consequences and Family Business, but it’s the main event which brings the majesty. The young Fish may have been a florid, self-regarding wordsmith, but that’s exactly what chimed with his peers. A kind of Morrissey for people who wanted their music to do more than shuffle along, he stared deep into his lonely soul, expectorated his self-loathing and gave us a pretty gritty view of society’s ills and thrills to boot. Many of his observations remain topical. The windswept romance of Kayleigh and Lavender provides early anthems. Everyone here knows every word, from the darkness of Bitter Suite to the football-crowd release of Heart Of Lothian to the stirring climax of Childhood’s End and White Feather. You don’t get endings more punch-the-air strain-your-vocal-cords than that.

Encores of Market Square Heroes and The Company ensue. A special show: you could feel the atmosphere, and fleetingly go back in time. We were still the same age when we left, but you can’t expect Fish to do everything for you.