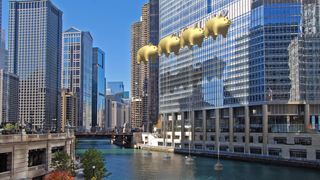 A Chicago-based architects have shared a proposal that would see the Trump Tower logo in the city obscured by four giant floating pigs – an idea inspired by the cover of Pink Floyd’s Animals album.

The artwork for the band’s 1977 record showed a pig floating between two chimneys of London’s Battersea Power Station and was conceived by bassist Roger Waters and designed by the late Storm Thorgerson.

And following November’s US presidential election, which was won by business tycoon Donald Trump, New World Design Ltd have put forward the idea of “rational design” which “is in contrast to the chaos of Mr Trump’s campaign and the ensuing acts of his administration.”

An entry on the company’s blog reveals the instillation titled Flying Pigs On Parade – A Chicago River Folly would be comprised of four gold-coloured balloon pigs tethered to buoys in the Chicago River.

The entry continues: “The folly is a design effort by NWD to provide visual relief to the citizens of Chicago by interrupting the view of the ostentatious Trump Tower Chicago sign.

“The design scheme follows rigorous rationale in providing layers of meaning while allowing for nuanced interpretations by viewers. The folly is intended to be moored in the Chicago River just south of 401 N Wabash, Trump Tower Chicago.”

The company add: “The giant inflatable pigs are a homage to Pink Floyd’s Animals album. We encourage folly viewers to listen and make their own interpretations.”

They also report they chose the colour gold as a “commentary on the gaudy style of Mr Trump’s own gold ensconced penthouse interior he has labeled comfortable modernism” while deciding on four balloons to mark each year of the Trump presidency.