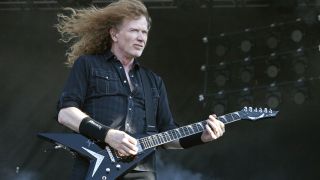 Megadeth leader Dave Mustaine says he was forced to change his approach to playing after the recruitment of new guitarist Kiko Louriero and drummer Dirk Verbeuren.

He believes he’s become a better performer as a result – and reveals that it’s allowed the band to bring back some songs they’d had to stop delivering on tour.

The veteran frontman has changed the habit of a lifetime by warming up before he goes out on stage, after being impressed by his colleagues’ energy and ability.

Mustaine tells 102.9 The Hog: “These guys are the best at what they do in the business. It’s really made me re-evaluate my playing.

“Usually I would not warm up, because I know what I’m doing. Seeing them now, they’re just so fierce, it makes me want to be the best I can be at what I do.

“Even if I am self-taught, even if it’s something I was just born with, I want to be the best I can.”

Mustaine underwent back surgery in 2011, and found his singing ability limited as a result. He says: “I had a plate stuck in my neck and it touched my vocal box, so my voice changed – it’s a little lower.

“A lot of songs in the past we had to skip because the register was so high. But with working through it, and exercising, and warming up and stuff like that, I’ve been able to return a lot of my vocal range.

“And that’s been good for us, because we’re been able to have more songs.”

Loureiro joined Megadeth last year, before the recording of latest album Dystopia. Verbeuren was confirmed as a permanent member in July after joining as touring drummer. The band continue a North American tour with Amon Amarth, Suicidal Tendencies, Metal Church and Butcher Babies until October 15.