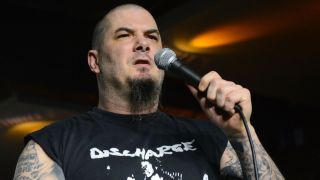 Down and Superjoint member Jimmy Bower believes bandmate Phil Anselmo was right to apologise for his “white power” outburst – but still thinks the vocalist was treated unfairly over the incident.

Anselmo advised Down to continue without him in the aftermath of his behaviour at this year’s Dimebash in Hollywood in January, where he made a Nazi salute and uttered the incendiary phrase.

In his apology he said it was an “inside joke” that had gone wrong, although he acknowledged it was unacceptable.

Bower tells Clrvynt: “When it happened, knowing Phil and our extremely dark sense of humour, I blew it off as him being stupid.

“Then Robb Flynn put the video up saying how his feelings were hurt, and the people things were starting to say made me understand that what he said was not cool and not funny, even in a joking sense, and it did hurt people’s feelings.

“It was really weird, because it honestly wasn’t a big deal to me, just because I know how Phil is. We joke about stupid shit. I guess the lesson learned is that you can’t do that around other people.

“I just wish people could take things with a grain of salt nowadays instead of everyone being so serious. People hit Phil pretty hard over it, but knowing him as he really is, part of me thought it was unfair.”

He argues: “Phil’s not like this. You can’t be racist if you’re from New Orleans – there’s so many different cultures here. You just can’t do it, and you’re raised to understand that.”

He adds: “I think he did the right thing by apologising sincerely.”

Down’s Pepper Keenan issued a statement soon after the incident, accepting Anselmo’s apology. But Bower says: “My attitude was, I didn’t do anything wrong and I’m not going to make a statement and throw more fuel on the fire.

“At the time, it was hard to explain who Phil was to people, because nobody was hearing it. It was just all focused on the bad shit. To try and throw a positive note in there, people weren’t having it.”

Anselmo’s Pantera colleague Vinnie Paul said this month that the vocalist’s behaviour had “tarnished” the image of their former band.