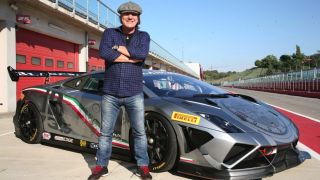 AC/DC frontman Brian Johnson is currently hosting a television series about great cars, and we've been given some exclusive, unseen footage.

Cars That Rock is currently airing on Quest TV, and features the singer learning more about some of his favourite cars, including various Minis, Lamborghinis and Ferraris.

It tonight’s episode, Johnson travels to Molsheim, home of Bugatti, and meets the technicians responsible for construction of the cars. He then travels to a local airfield and is handed the keys to a Bugatti Veyron (capable of 268mph and Top Gear’s Car of the Decade), which he proceeds to drive extremely quickly.

In our exclusive clip, Johnson impersonates French test driver Pierre‐Henri Raphael and is instructed to take his hands off the wheel as he brakes.

Cars that Rock is on Thursday nights at 9pm on Quest TV.